I received this message yesterday from “Young Ethiopian Diaspora”… 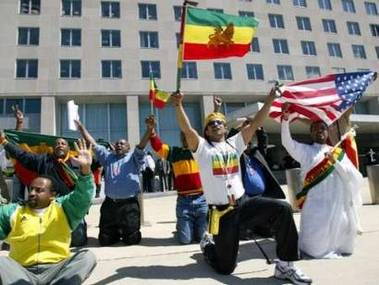 Ethiopian Americans rally in May at the embassy in Washington

It has come to our attention that the membership of the Congressional Black Caucus has been invited to dinner at the Ethiopian Embassy on Wednesday, June 14 at 7 p.m.

In light of the Ethiopian’s governments brutal shooting and killing of 36 innocent citizens and the rounding up of countless opposition members this past week, please help us in urging the members to not attend this dinner…

Good News! Most of the members have cancelled! :))
and here is a statement…

Members of the Congressional Black Caucus and the Ethiopia Caucus Express Concern over the Situation in Ethiopia Tenth District Congressman Donald Payne (D-NJ),
co-chair of the Congressional Black Caucus Task Force on International Relations, and Ethiopia Caucus Co-Chair Congressman Mike Honda (D-CA) yesterday strongly condemned the unnecessary use of excessive force and killings of students and innocent civilians by Ethiopian security forces. The killings appear unnecessary and indiscriminate. Reports confirm that more than 40 people were shot dead, some by sharp shooters, and over a hundred were seriously injured.

Representatives Payne and Honda were hopeful after the May 15th competitive elections, in which the opposition reportedly made significant gains, that Ethiopia would become more stable, democratic, and prosperous. They believe last week’s developments have tarnished, once again, Ethiopia’s image and raised concerns about the level of Ethiopia’s commitment to fundamental freedoms and respect for basic human rights…

Congratulations to all of you who contacted your Congressional Representatives about the troubling situation in Ethiopia.

Congratulations also to the Ethiopian Americans for doing what you can to help Ethiopia on it’s quest for democracy!