“The US will do its part to bring Africa the brighter future it deserves.” 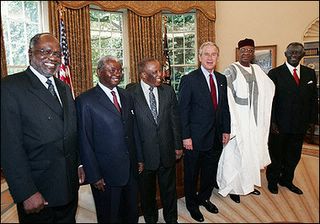 George Bush welcomed democratic African leaders to the White House on Tuesday and pledged to continue the success of the AGOA Agreements that he believes promotes democracy and opportunity to the continent:

That was certainly the idea behind the African Growth and Opportunity Act, a bipartisan act, an act of the United States Congress that recognized this fact. You see, AGOA is promoting democratic reform in Africa by providing incentives for these nations to extend freedom and opportunity to all of their citizens. Under this law, African nations can obtain greater access to our markets by showing their commitment to economic and political reform, by respecting human rights, tearing down trade barriers, and strengthening property rights and the rule of law, which is precisely what the leaders of these five nations are doing.

Because AGOA is producing results, I’ve twice signed into law provisions that build on its success and extend its benefits long into the future. My predecessor worked with the Congress to get the law passed, I have been honored to work with the Congress to extend the good law.

* Last year, exports to the United States from AGOA nations were up 88 percent over the year before, and non-oil exports were up by 22 percent.

* Over the same period, interestingly enough, U.S. exports to sub-Sahara Africa were up 25 percent.

* Not only have folks in Africa benefited by selling products in the United States; American businesses, small and large, have benefited through the opening of the African market, as well.

* Across sub-Sahara Africa, economic growth increased to an eight-year high.

* Real per capita income increased by 2.7 percent, and this growth is expected to continue in 2005.

* By creating jobs and lowering prices and expanding opportunity, AGOA is today developing benefits for Americans and Africans alike, and that’s important for our fellow citizens to understand.

* 37 African countries are now eligible for AGOA benefits, and next month in Senegal, senior ministers from the Bush administration will meet with government ministers from these 37 AGOA nations to build on this progress.

The US is helping with the AIDS crisis in Africa:

Working with our African partners, we have now delivered lifesaving treatment to more than 200,000 people in sub-Sahara Africa, and we’re on our way to meeting an important goal — an important five-year goal — of providing treatment for nearly two million African adults and children.

** We believe Africa is a continent full of promise and talent and opportunity, and the United States will do our part to help the people of Africa realize the brighter future they deserve. **

Also, Paul Wolfowitz announced Monday that he is pleased with debt relief to Africa:

New World Bank chief Paul Wolfowitz praised a historic deal to cancel the foreign debt of some of the world’s poorest nations and said he was hopeful debt relief was also on the way for Africa’s biggest debtor, Nigeria.

Wolfowitz spoke to reporters soon after arriving Sunday in the Nigerian capital, Abuja, on the first leg of a four-nation Africa tour – his first since taking over as head of the 184-nation development bank earlier this month.

Finance ministers from the world’s richest countries, grouped together in the G-8, agreed to cancel US$40 billion (euro 33 billion) of debt owed by 18 of the world’s poorest nations, most of them in Africa. Much of the debt was owed to international institutions such as the World Bank.

Update: (Thursday AM) Paul Wolfowitz apologizes for the Rwanda Genocide genocide today. This is significant. Now, what about Darfur?