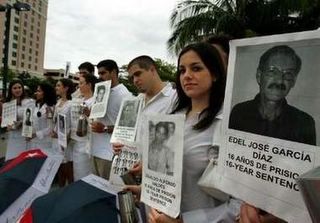 Protesters outside of the OAS Meeting in Ft. Lauderdale, Florida, with pictures of Cuban dissidents currently held in jail in Cuba.

The US and 33 other countries at the Organization of American States Meeting have pledged to improve democracy in the Western Hemisphere:

The 34 countries that will participate in a June 5-7 inter-American meeting in Fort Lauderdale, Florida, have pledged their mutual cooperation to better deliver the benefits of democracy to the Western Hemisphere.

The pledge, made in a “Declaration of Florida,” issued June 1, restates a theme of the Fort Lauderdale meeting of the General Assembly of the Organization of American States (OAS) that democracy is the best political system for guaranteeing human rights and achieving social and economic development. The United States is hosting the OAS General Assembly meeting of the region’s foreign ministers for the first time since 1974.

The declaration calls on the OAS Permanent Council to develop “further means” of ensuring that civil society organizations can present their views and advice to the OAS on a “systematic and regular basis” on issues pertinent to the Inter-American Democratic Charter. 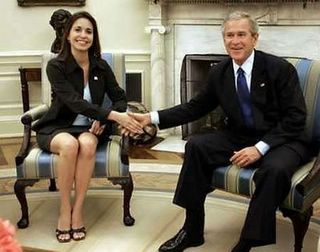 President Bush met with Venezuelan Activist Maria Corina Machado at the White House this week. The meetings with Machado did not please the Chavez Regime. Maria is in Fort Lauderdale to protest for political rights in Venezuela.

Venezuelan President Hugo Chavez is already accusing the US of imposing a global dictatorship in the run up to the conference:

Venezuelan President Hugo Chavez accused the United States of trying to impose a “global dictatorship” and said that it, not Venezuela, should face OAS scrutiny.

“So, they’re going to try to monitor the Venezuelan government through the OAS, they must be joking!” Chavez said, speaking on his weekly “Hello President” TV and radio show.

“If there is any government that should be monitored by the OAS, then it should be the U.S. government, a government which backs terrorists, invades nations, tramples over its own people, seeks to install a global dictatorship,” he said.

President Bush is addressing the Assembly on Monday:

“What the president will focus on is that we cannot take democracy in our hemisphere for granted. Elections and democratic rule is only the beginning,” White House spokesman Scott McClellan said.

“Successful democracies are built on free institutions that guarantee transparency and rule of law and accountability. And I imagine the president will talk about that in his remarks.” 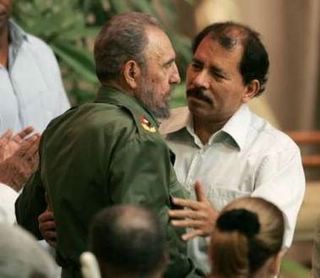 Castro gets a hug from Daniel Ortega at the Cuban Anti-Terrorism Conference in Cuba this week.

Castro is pressuring the US to return to Cuba anti-Castro Activist Luis Posada Carriles. Castro wants to retry Castilles for a 1973 bombing. Castilles has already been tried twice for the crime and found innocent. Venuzualan Leader Hugo Chavez is backing Castro on this demand.

Protesters are already pressuring the Cuban and Venezuelan Delegations at the OAS.

CUBA IS EVEN SEEING SOME CAPITALISM LATELY, VIDEO HERE