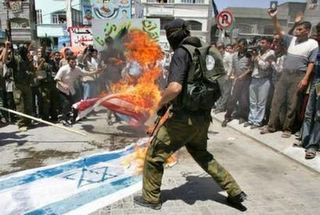 For starters… Another US Flag goes up in flames this week at the Jabally Camp in the Gaza Strip.

** On Tuesday, the author of “Great Chicago Fires” was arrested… for Arson… in Chicago! **

The co-author of a book on a deadly 1958 church-school fire was in jail on Tuesday, charged with setting a fire at another school, authorities said.

David Cowan, who helped write an account of the blaze at Chicago’s Our Lady of the Angels School that killed 95 pupils and nuns, was arrested on Thursday and charged with arson after a fire broke out in a storage building at St. Benedict’s where he worked as a janitor.

“To Sleep With the Angels: The Story of a Fire” detailed the horrific fire and subsequent changes to national fire safety rules. Cowan also wrote “Great Chicago Fires: Historic Blazes That Shaped a City.”

Also on Tuesday, a former Democratic Alderman was arrested for Arson in Waterloo…

A former Waterloo, IL Democratic Alderman was charged with arson yesterday for setting his business on fire two years ago:

He was appointed a seat on the Waterloo city council in 2003. That same year his business was destroyed by a fire. Investigators say he could end up in prison if convicted of arson and fraud.

Tuesday evening, Augustine rode in the back seat of a U.S Marshals van. He was en route to a local jail. Augustine had just pleaded not guilty during a federal arraignment.

It comes after a two year investigation by numerous agencies, including the U.S Attorneys Office and the Bureau of Alcohol, Tobacco, Firearms and Explosives. Augustine was arrested Monday at his Waterloo Illinois home.

Would anyone know why the U.S. Attorney’s Office or the Bureau of Alcohol, Tobacco, Firearms and Explosives was involved in this investigation?

And, there you have it! Your daily arson news from the heart of Jesusland!