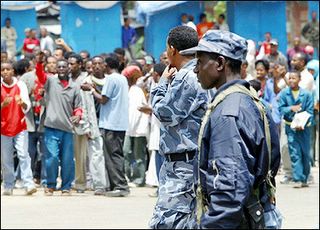 The second day of protests and police violence continued in Ethiopia Tuesday after the flawed May elections:

Police raided a technical college in Ethiopia’s capital on Tuesday, beating up students and firing rubber bullets on the second day of defiance of a government ban on demonstrations, witnesses said.

Clashes between police and student demonstrators on Monday left a girl dead, seven people injured and hundreds arrested in protests against disputed election results that left Parliament in the hands of the ruling party.

The army’s special forces troops stood by in the capital for the second day on Tuesday, armed with assault rifles and rocket-propelled grenades. Riot police with tear gas also stood ready as regular police quelled the demonstration in Addis Ababa. 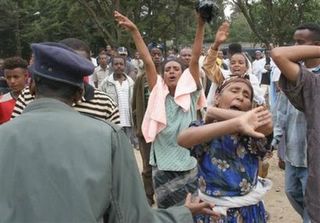 Family members were not allowed onto the university grounds while police were surrounding the student protesters.

Construction workers also clashed with police in Addis Abada in support of the students:

On Tuesday, about 200 youths gathered outside the college in Addis Ababa, throwing rocks at passing vehicles and demanding the release of students detained Monday. Police responded by charging into the crowd in an armored truck and clubbing protesters using butts of their rifles and batons.

Some 100 students inside the college were rounded up. Many students were escorted off campus by police. One student with a gunshot wound in the stomach was hospitalized in critical condition, doctors said.

Construction workers threw rocks at police in support of the students, but several of them were soon arrested, as well as other non-students who joined the protest Tuesday. About 50 people were taken away to be charged.

“The police came running into the college, beating students and hitting them over their heads with their batons. It was very scary and they were very aggressive and did not want to calm the situation down. It didn’t last long, only five to 10 minutes, because we are young and they had guns and batons,” said Liya Tsion, 17, a student of information technology.

Ethiopundit has been reporting on the protests and elections.

And, for more information on this controversial election I have previous posts here and here.