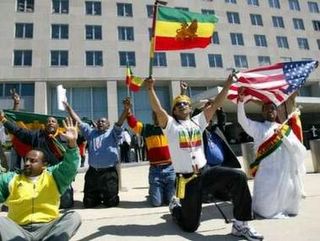 Ethiopian Opposition Party Protesters wave the Ethiopian and US flags at a protest in front of the State Department against the ruling party of Ethiopia.

“It is a powerful statement, and as an Ethiopian-American, I am frenzied that no one in the States is covering the birth (and possible quick death) of a new Democracy in Ethiopia, an ancient land of 74 million people.”

“One of the largest countries in Africa just had its first real elections in its 3000 year history– with a 90% turnout! It’s been a long time coming and now it’s at a standstill with reports of election rigging, etc. from the ruling party— the Ethiopian Peoples Revolutionary Democratic front, a group of former Marxists who have undergone an “extreme makeover”– and who severely underestimated the opposition”.

“I’ve given up on the liberal press! With all their bellyaching about organic democracies, they have said nothing about these historic elections and the possibility that a quasi-Marxist government can suppress the vote.”

“And, Jimmy Carter!… It’s a disgrace what he has done!”

The ruling party has demonstrated its desire to plunge the country into anarchy if its power is compromised. 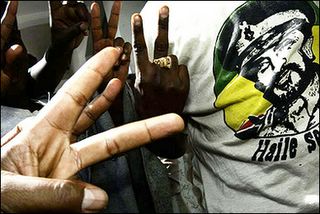 Ethiopians from the Coalition for Unity and Democracy flash the parties sign at a rally in Ethiopia. The party will boycott the elections unless complaints of wide spread vote fraud are resolved.

“There is a large Ethiopian constituency of conservative Ethiopian-American who are frustrated that Ethiopia might be possibly falling off the US radar.”

“There is another Ukraine in the horizon, and I hope you can please let the world know!” 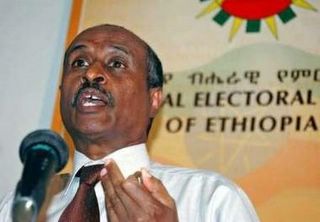 Kemal Bedri, the chairman of the National Election Board of Ethiopia (NEBE), addresses allegations of irregularities from all sides on May 30th. (AP)

I recieved these strong and hopeful words from Ethiopian reader SMS tonight. I promised that I would pass it on.

May the world not forget the people of Ethiopia!

Ethiopundit has much more on the story.

“President Bush is the *first* US President who has chosen Trade over aid to get Africa going. He deserves a lot of credit! Clinton, with all his booyahing, continued with the tradition of dumping money on the problem and then paying lip service and going into angst as to why, why this is not working. Don’t get me started!”

Update 2: (Monday AM) Police broke up the “First Protests” against the May elections earlier today in Addis Ababa! 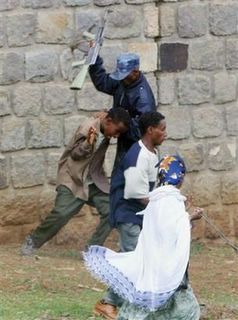 A student gets a rifle butt to the back of the head by a policeman in Addis Ababa today.

The BBC is reporting on the protests from today:

Hundreds of Ethiopian students have been arrested in the capital, Addis Ababa, after staging protests over last month’s elections.

Baton-wielding police stormed the two university campuses which the students had occupied. They had accused the ruling EPRDF party of fraud.

“Where are they taking my son?” cried the mother of one student as he and others were herded by police onto one of eight trucks, each carrying about 80 people, reports the AP news agency.

“We are demonstrating because EPRDF is making a fraud, misleading the whole international community saying they have won,” one student yelled through the gates of the social science school before the police took action.

South African News 24 has this:

Armed officers from the federal police blocked access to the Faculty of Social Sciences and the nearby Faculty of Science and Medicine at the University of Addis Ababa as up to 900 students at the two campuses chanted and sang, protesting alleged ruling party fraud in the May 15 polls, they said.

Between 400 and 500 students were locked in at the medical school and between 300 and 400 at the social sciences school, according to an AFP correspondent on the scene.

The election results have been moved back a month because of all of the reports on voting irregularities.

Ethiopundit has this to add:

Protests post-election were outlawed to prevent a Kiev / Beirut type of reaction that will gain Western attention. University students defied the ban and are
being dealt with harshly.

The Americans and Norwegians were likely to point fingers (at the election results). Carter was delighted not to do so and even the EU observers were critical of Carter as we saw before. I had forgotten what happened in Venezuela.

* Not a single polling place where observers where present was won by the government.*

Update 3: If you want to get the word out, don’t bother with the MSM, just go to Instapundit, Glenn Reynolds, who just linked to this election news. Hopefully the word will get out on the tragic yet hopeful news from Africa. Will Ethiopia be the Ukraine of Africa? That would be the best thing that happened to the continent politically in years!