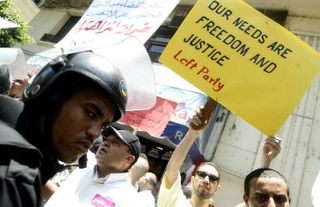 Demonstrators in Cairo today were met by police with nightsticks today.

After two hours of demonstrations police rushed in and assaulted a group of pro-democracy protesters in Cairo today:

The police charged a group of about 60 protesters as they made their way to a subway station after a two-hour demonstration outside the Church of the Virgin Mary in Zeitoun, a low-to-middle income district on Wednesday

Mohammed el-Sharqawi, who was leading the group in a chant of “Down with Mubarak,” said the riot police struck out left, right and centre with their nightsticks. He did not know how many protesters were assaulted.

“They started hitting so hard, I fainted and I don’t remember what happened next,” el-Sharqawi, 23, told reporters. “My face is bruised, my side and back hurt too.” 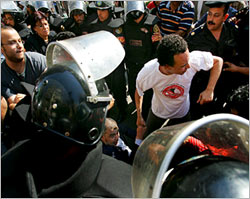 The protesters want more reform of the current election laws:

“We want a free government. Life has become bitter,” chanted the protesters.

The demonstrators called for the number of terms an Egyptian can serve as president to be limited to two and demanded an end to emergency laws in place since 1981.

Some briefly chanted against any extension of Mubarak’s rule or a transfer of power to his son Gamal.

In a separate protest on Wednesday evening, hundreds of people shouted “Down with Hosni Mubarak” and other anti-government slogans in a square in a residential suburb of northeast Cairo.

Hemmed in and outnumbered many times over by riot police in black uniforms, members of the informal Youth for Change group and the Islamist-dominated Labour Party spent two hours trying to win over the people of the district.