WBBN Reporter in the above video clip says the apology was definitely made because of Mayor Daley’s remarks! 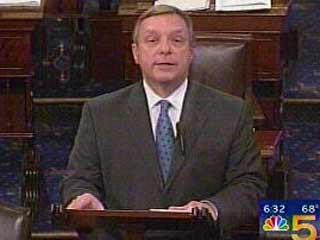 Senator Durbin (D-IL) gave a tearful apology yesterday for comparing the US Military to Nazis.

Teary-eyed Senator Durbin from Illinois apologized on the Senate floor Tuesday, for comparing Guantanamo interrogators and US Military personnel to Nazis and other evil-doers.

“Some may believe that my remarks crossed the line,” said the Illinois Democrat, at times holding back tears. “To them I extend my heartfelt apologies.”

Durbin said he never intended disrespect for U.S. soldiers around the world.

“They’re the best,” he said Tuesday.

A news reporter from Chicago’s News Channel 2 WBBM said that he had firsthand information that Senator Durbin made his apology after fellow Democrat, Chicago’s Mayor Daley, who has a son in the military, lashed out at the senator earlier in the day during his own press conference.

Here is what the Chicago Mayor said earlier in the day at a press conference:

Mayor Richard M. Daley said Tuesday that U.S. Sen. Richard Durbin should apologize for his recent statements regarding the treatment of prisoners at a U.S. prison camp in Guantanamo Bay, Cuba.

Jackson’s Junction also has the video of Durbin’s apology.

Bill O’Reilly echoed Powerline on Tuesday night noting the absurd allegations of the Minneapolis Star-Tribune for painting Durbin as a “victim of the right”.

And, for the record, although this was not reported before, the St. Louis Post Dispatch did its best to pitch-hit for Durbin in an earlier article this week, as well.

Mongo has a few words for the Illinois Senator.