Saturday’s hastily arrranged working dinner appeared mainly symbolic — aimed at showing that despite voters’ defeat of Chirac in the referendum, and Schroeder’s defeat in the biggest state election, the two countries remained behind the proposed constitution.

Chirac and Shroeder urge Britain to do the “right thing”
and not to buckle over the EU Constitution.

But Blair could care less as he moves his attention to the suffering in Africa (via Instapundit and the News Telegraph).

Tony Blair has given up on Europe as an issue worth fighting for, senior allies of the Prime Minister have told The Sunday Telegraph.

After the grief the Franco-German Alliance flung his way before and during the Iraq War, Tony Blair sees no obligation to follow Jacque’s direction. His mission now is focusing on Third World poverty. 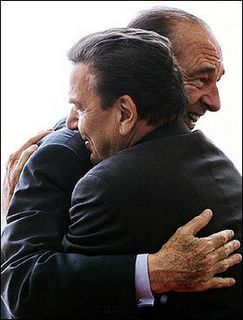 Jacques Chirac hopes the arms of old pal German Chancellor Gerhard Schroeder will lift his spirits after the failed EU vote in France this week.

Jacques Chirac fled to the comforting arms of his German friend today after a brutal week. Jacques left France confused and dazed by the French public who just weren’t buying his sympathetic looks and want real answers. Like Shroeder and Germany, Chirac and the French are reeling from the pain of a stagnant economy and high unemployment:

Just weeks ago the two men presided over the engine room of the European Union, the Franco-German axis.

Now Chirac leads a nation which last weekend turned its back on decades of staunch pro-Europeanism by delivering a resounding “no” to the treaty which is designed to provide a framework for an expanded European Union.

Schroeder meanwhile is emerging, by default, as the potential saviour of the European project, shuttling across the continent for talks in a bid to rescue the constitution from the scrapheap.

The rejections from voters in France and the Netherlands have left the EU reeling. Leaders said before the two referendums that there was no plan ‘B’ and it appears they were not bluffing.

Suddenly, the French aren’t buying those teary-eyed looks of concern and apologetic shoulder shrugs that have worked for Jacques in the past:

Last Tuesday evening, two days after France’s stunning rejection of the European constitution, the president broadcast a short address to the nation from his office in the Elysée palace.

The vote, he realised, was a demand for “action and results.” He had therefore decided to give a “new impulse” to his government. The fight against unemployment demanded a “national mobilisation”. It was time once again, said Chirac, to “rally around the national interest”.

The president has been selling this kind of Gaullist flannel since he began in politics four decades ago.

And it is some measure of his huge stamina – as well as the public’s willingness to be soft-soaped – that he still thinks he can get away with it.

But this week there is change in the air. Chirac continues to play the part of concerned guardian of the nation, but the nation is beginning to tune him out. The words are spoken with the same ringing gravitas, but now they come across as the verbal tricks they always were. The president’s brow keeps the deep furrow that says “I share your pain”, but now nobody believes him.

Chirac shuffled his deck of cards this week as his popularity hit an all time low:

With less than two years to go in his mandate, Chirac faces the dual challenge of rebuilding his popularity rating — now at an all-time low — and of reassuring his European Union partners of France’s commitment to the bloc.

Following last Sunday’s rejection of the EU treaty in a referendum, Chirac played one of his final political cards by naming faithful lieutenant and career diplomat Dominique de Villepin as his new prime minister.

But the 72-year-old French leader was forced to include the charismatic and popular Nicolas Sarkozy — his arch-rival who has made no secret of his wish to succeed Chirac in 2007 — in the new cabinet, making him Villepin’s number two.

The appointment of the unlikely duo constitutes a high-stakes gamble for Chirac as sparks could fly between the 51-year-old Villepin, an aristocrat who has never held elected office, and the 50-year-old Sarkozy, who has vowed to maintain his “complete freedom of speech” while serving as interior minister.