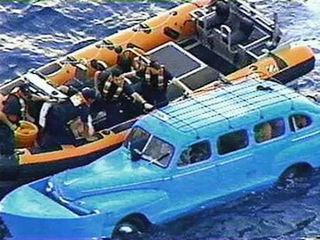 Alright, pull her over!

The third attempt was no charm for Rafael Diaz, the Cuban taxi he revamped into a boat was intercepted before it could reach “open road” on Monday…

A group of Cubans making the third bid in two years to reach the United States in a vintage American car converted into a boat were intercepted by the U.S. Coast Guard, relatives said on Wednesday.

In their impoverished Havana neighborhood, tearful mothers implored U.S. authorities to allow the emigres to stay in the United States, saying they would be jailed if returned to Communist-run Cuba.

Thirteen Cubans, including six children, sailed across the Florida Straits in a 1949 Mercury with an built-on prow and a taxi sign on the roof. They were intercepted about 20 miles off Key West on the southern tip of Florida on Tuesday morning, Miami television station NBC 6 reported.

“He’s my only son. He is all I have got,” said Diaz’s mother Josefina Rey, 79. “But at least in the United States he can remake his life. Here they will not leave him in peace.”

“That vessel, could, at any moment, have rolled over and caused a huge tragedy,” he said of the latest attempt to reach Florida in a converted vintage American vehicle.

But in Diezmero, one neighborhood over from where writer Ernest Hemingway lived for 20 years, residents have no doubt the risks are worth taking. Their cinder-block and wooden houses are on streets that smell of sewers and uncollected garbage, and frequent power outages make the tropical heat hard to bear.

Rafael is not the only one with the idea of making boats of vintage US vehicles in Cuba. Here are two other vehicles that were used on attempts to reach Florida.

The man has got some talent! You’ve got to give it to him!