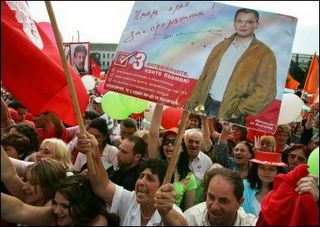 Bulgarian socialists protest in Sofia. The last time the socialists were in power the economy tanked.

The Socialist Party led by 39 year old Sergei Stanislav claimed victory in the Bulgarian elections this weekend but without a clear majority to form a government outright:

The opposition Socialist Party was leading in parliamentary elections, but fell short of winning an outright majority that could oust Bulgaria’s former king — now prime minister — from office.

Socialist leader Sergei Stanishev claimed victory and said he would seek to form a governing coalition.

“We won the confidence of the people,” Stanishev told a news conference. “We are ready to form a government … and we will negotiate with any democratic party” to form a coalition in Bulgaria’s parliament.

He declined to name any possible partners, but described a coalition with Saxcoburggotski’s National Movement as “highly improbable” — making it unclear whether the former king would retain a post in a new government — and ruled out any deal with an upstart nationalist party that won a surprising nearly 9 percent.

The last time the Socialists were in power in 1994 the economy plummeted into crisis:

He has promised that he will rapidly raise living standards to prepare a nation still suffering from a difficult post-communist transition for the prices increases that accompany EU accession.

But he has admitted that he is worried about a recent warning from Brussels to Bulgaria to speed up reforms or wait until 2008 to join the EU.

On Saturday, many voters said they were weary of the Socialists, who won elections in 1994 but plunged Bulgaria into its deepest economic crisis ever and were forced out of office within three years.

Their candidate list for the vote featured four ministers from that era. 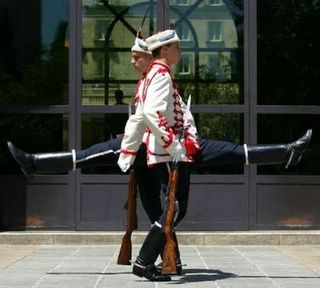 Changing of the Honour Guard at the Bulgarian Palace.

The man they call “The Czar” and current Prime Minister voiced his desire to stay in power until Bulgaria joins the EU in 2007. He ruled Bulgaria as a child-king at age nine until the communists took him out of power. He fled the country and later became the first democratically elected Prime Minister in 2001:

Saxe-Coburg, Bulgaria’s former exiled king who swept to power in 2001, was not ready to concede defeat.

“The broader the next government is, the better for Bulgaria,” he remarked, after his party said for the first time that it would be prepared to enter into a coalition with the Socialists.

Political analyst Dimiter Avramov said the prime minister had not done badly after disappointing voters with cautious reforms that did not bring enough relief against povery, and might still have a role to play.

The current Prime Minister has seen terrific gains in the Bulgarian economy since being in office:

Under Saxcoburggotski’s current government, Bulgaria recorded 5.6 percent economic growth in 2004, a record $2.5 billion in foreign investment, single-digit inflation and a drop in unemployment to less than 12 percent from 18 percent in 2001.

Update: (Monday) The Socialists who have promised a 20% pay hike, are looking to join with the Prime Minister’s Party (MNSII) and the Muslim-minority Movement for Rights and Freedoms (MRF) to form a government.