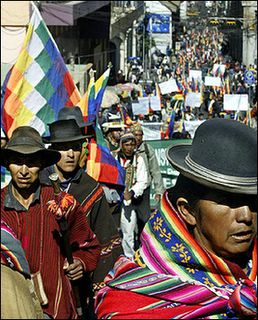 Thousands of vocal protesters are converging on La Paz, Bolivia. The La Paz protesters are wanting a piece of the lucrative oil industry. The protest is pitting the poor western half of indigenous Bolivians against the wealthier eastern half of the country:

Tens of thousands of farmers, teachers, miners and laborers marched on Bolivia’s legislature, paralyzing La Paz as they pressed demands for a constitutional assembly and nationalization of the country’s vast natural gas reserves.

The crowds, estimated at 40,000, are protesting as lawmakers gather for an emergency session to debate calls for a constitutional assembly to discuss regional autonomy.

The debate pits legislators from the right and centrist majority, many from eastern Bolivia, with a vocal and militant left-wing minority that can rely on street protesters for support.

The country’s split by class, region and race was exemplified when five people were injured Wednesday in the eastern city of Santa Cruz in clashes between a local youth organization and protesting Quechua and Aymara Indians.

The youth group — which in the past has been associated with right-wing extremist groups — is linked to business organizations seeking regional autonomy for Santa Cruz province, the wealthiest region of the country.

Members of the youth group hurled rocks and swung clubs at the indigenous protesters.

Disagreement over exploiting Bolivia’s gas reserves resulted in deadly riots that toppled president Gonzalo Sanchez de Lozada in October 2003. He was replaced by vice president Mesa, a popular historian and journalist with no political party to support him.

Bolivia’s eastern provinces, making up about half of the country and where the gas wealth is located, seek a regional autonomy that borders on secession.

The Andean half of the country, including La Paz and the home of impoverished Quechua and Aymara Indians, demands a cut in the gas wealth and is looking for a constitutional assembly to resolve the dispute. 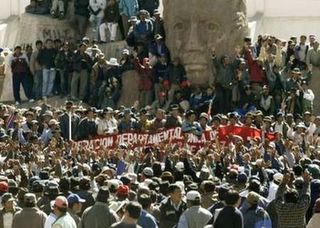 The protest effectively shut down the airport for a few hours yesterday:

Protests Tuesday left one person injured and 12 under arrest.