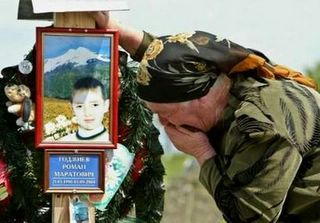 A relative at the grave of a child murdered in Beslan. The child was attending the first day of classes of the new school year when terrorists stormed the building.

The court in the capital of the Russian republic of North Ossetia, a short distance west of war-torn Chechnya, rang with the screams of near-hysterical women brandishing photographs of children killed during the battle between militants and Russian forces at the school. 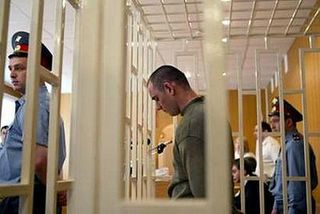 Kulayev takes the stand in the Beslan School Massacre Trial.

The lone terrorist survivor took the stand at the Beslan School Massacre Trial in North Ossetia today. Kulayev is the only surviving terrorist from the bloody and violent conclusion of the grade school massacre in Russia. In his defense testimony, Nur-pashi Kulayev is attempting to put blame on the Russian authorities and the dead terrorists:

The explosions that sparked the bloody end to the September 2004 school hostage-taking in Beslan were set off when sharpshooters killed two militants holding triggers to homemade bombs, Nur-Pashi Kulayev, the only surviving Beslan hostage-taker, tried for the massacre on Tuesday, testified.

The testimony of the only surviving participant of the seizure provides potentially new insights into the Sept. 1-3 raid on Beslan’s School No. 1 — the precise details of which remained murky more than eight months after the seizure.

ITAR-Tass said Kulayev told the court of some of the arguments that erupted among the hostage-takers. Some apparently objected to taking children hostage, and several wanted instead to seize the nearby police station, he reportedly testified.

“The children and women were captured and forced into the school building. Then the militants started shouting: ’The police station is nearby, let’s seize it, why seize the school?’” ITAR-Tass quoted Kulayev as saying.

Two of the militants were female suicide-bombers who openly disagreed with the terrorist group’s leader about holding children hostage and were killed when he detonated their bombs by remote control, Kulayev testified, according to the agency. 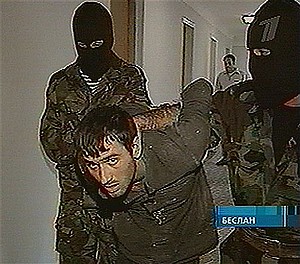 Kulayev is charged with murder, banditry, terrorism and the taking of hostages.

However, the Chechen terrorist disagrees with the pilfering charge against him:

The 30-year-old former contract laborer from the Chechen village of Engenoi, has been charged under nine articles of the Criminal Code of Russia, including murder, banditry, terrorism, and the taking of hostages. He admits to seven of these, but categorically denies the other two. As before, Kulaev denies his involvement in the murders. He insists that he was not involved in the murders either at the time of the occupation or during the storming of the school. “Yes, I had an automatic weapon. Yes, I fired it. But only into the air,” he asserted under questioning.

During the investigation, the Chechen admitted to terrorism, banditry, and everything else, but… he did not like it when the investigators also charged him under Article 166 of the Criminal code (Misappropriation of an automobile without intent to steal).

Kulayev, who faces life imprisonment, has acknowledged being one of the guerillas who stormed a school in Beslan on September 1, 2004, seizing more than 1300 hostages.

Witnesses saw Kulayev firing into crowds of hostages who survived explosions set off by the guerillas.

The dead included parents, teachers and 186 children who were at the school for opening day ceremonies. 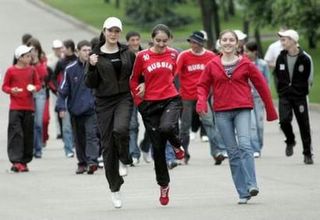 Surviving Children from Beslan on a trip to Moscow.

The three day hostage siege ended with over 200 dead and 531 hospitalized including 283 children:

Alla Gadieyeva, 24, who was taken captive with her 7-year-old son and mother, said the militants displayed terrifying brutality from the start. One gunman, whose pockets were stuffed with grenades, held up the corpse of a man just shot in front of hundreds of hostages and warned: “If a child utters even a sound, we’ll kill another one.”

When children fainted from lack of sleep, food and water, their masked and camouflaged captors simply sneered, she said, adding that adults implored children to drink their own urine in the intolerable heat of the gym.

She and other hostages said there was a little water but no food the first day. The hostages got nothing to eat or drink after that.

Gadieyeva told of three days of unspeakable horror — of children so frightened they couldn’t sleep, of captors coolly threatening to kill off hostages one by one. The gym where they were held was so cramped there was hardly room to move.

Update: My heart goes out to the people of Beslan today! Michelle Malkin has linked to this post and has some other previous links to the school massacre story. Charles Johnson at Little Green Footballs has linked here. Do you suppose the “Committee of Beslan Mothers” would like a few moments alone with Kulayev?