It’s too bad the only war front they understand is one directed at the president! 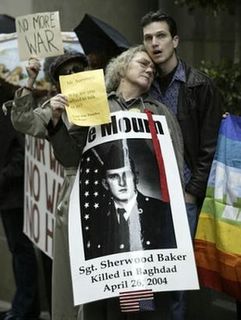 Celeste with her son Dante Zappala,…
Another hardcore Leftist branded “Non-Partisan” by the media.

The BBC “exposes” today that 100 US Congressmen and women will hold a “mock” hearing on the UK memo which suggested that President Bush had decided on war with Iraq eight months in advance of the start of conflict.

More than 100 Democrats will take part in the public forum, calling for a White House explanation of the memo.

The BBC’s James Coomarasamy in Washington says although the hearing is unofficial, it coincides with waning public support for US efforts in Iraq.

Mr Bush denies he had made up his mind at the time to attack Saddam Hussein.

Here’s where the BBC gets Comical:

“Our investigation is just commencing and I can tell you more and more people are getting disturbed, some outraged, by what these disclosures suggest has happened,” Michigan Congressman John Conyers (nut)told the Associated Press news agency.

Mr Conyers has urged Republicans to take part in the House of Representatives’ hearing, though none (!) appears to have agreed to do so.

However, around 500,000 Americans have signed a petition against the war.

Gold Star Families for Peace, a non-partisan group (?), has expressed its support for the hearing.

“We want our Congress to stand up, to identify and investigate the lies and follow it wherever it goes,” Celeste Zappala, who lost a son in Iraq, told the AP.

So, what about this “non-partisan group” Gold Star Families for Peace? And, what about one of it’s founding members, Celiste Zappala?

*To bring an end to the occupation of Iraq.

Hmm… Doesn’t sound very non-partisan when they use that “occupation” word!

And, here is what Celiste had to say in an interview last July:

JS– Your son was one of the soldiers that died in Iraq. Since his death you have come out strongly against Bush and the Iraq War.

CZ– I was opposed to the war before it happened. I am a person who has tried to live consciously, in a non-violent manner, and also raise my sons that way, based upon my religious beliefs. So I have always been opposed to war in any form. I protested the Vietnam war, worked in the Century Movement to help refugees from Central America who were affected by American policy and involvement in Central America. I have also worked to promote human and civil rights here at home. It’s my life’s work, fighting for a humane and just world.

JS– So you were opposed to the Iraq War from the very beginning?

CZ– Well you know, when 9/11 happened I had this overwhelming fear that this would mean that war would follow. I had hope that the people of the leadership would be able to take that terrible event and turn it towards unity and peacefully seeking justice, but that isn’t what happened. It always seemed inevitable with the position the administration took that the unilateral attitude of ‘Us against them, never mind the rights of anybody else, we’re the superpower, no one else matters, we’re the only ones that matter!’

It was inevitable, absolutely inevitable, that this is what we were going to end up with.