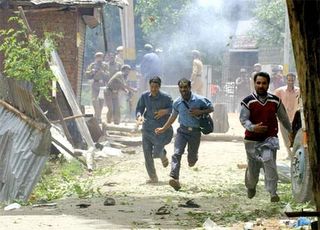 Muslims flee the site of a suicide bombing earlier today in Pulwama, Kashmir, after police started opening fire to dispurse the crowd.

Another car bombing outside a school in Kashmir today:

At least twelve people were killed and 80 injured when a powerful car bomb blamed on Islamic rebels exploded outside a roadside school in a busy southern Kashmir town, Indian police and the army said.

Police said six people were killed at the site while another six died in hospitals or on their way to Srinagar’s main hospital.

Two badly mutilated bodies were seen lying under a damaged truck before police gathered body parts and placed them in a bag. Only the engine of the car in which the explosive was planted remained.

“So far 12 people have died and over 80 are injured,” a spokesman said, adding three of the dead were federal police officers. Eight of those hurt in the blast were in critical condition.

Bleeding students fled the school, leaving behind their books and shoes which lay scattered in the grounds and classrooms. At least 12 of the injured were high school students but police could not immediately indicate their conditions.

A similar bombing killed two individuals at a Kashmiri Christian Missionary School in May.