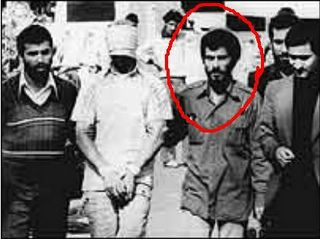 Mahmoud seen in a 1979 photo escourting an American hostage in Tehran.

The pictures are one thing but this article from Iran Focus is just chilling:

The photograph of Iran’s newly-elected president, Mahmoud Ahmadinejad, holding the arm of a blindfolded American hostage on the premises of the United States embassy in Tehran was taken by an Associated Press photographer in November 1979.

Soon after the Iranian Revolution in 1979, Ahmadinejad, who was studying in Tehran’s University of Science and Technology, became a member of the central council of the Office for Strengthening of Unity Between Universities and Theological Seminaries, the main pro-Khomeini student body.

The OSU played a central role in the seizure of the United States embassy in Tehran in November 1979. Members of the OSU central council, who included Ahmadinejad as well as Ibrahim Asgharzadeh, Mohsen Mirdamadi, Mohsen Kadivar, Hashem Aghajari, and Abbas Abdi, were regularly received by Khomeini himself.

Former OSU officials involved in the takeover of the U.S. embassy said Ahmadinejad was in charge of security during the occupation, a key role that put him in direct contact with the nascent security organizations of the clerical regime and the Islamic Revolutionary Guards, which he later joined.

Defectors from the clerical regime’s security forces have revealed that Ahmadinejad led the firing squads that carried out many of the executions. He personally fired coup de grace shots at the heads of prisoners after their execution and became known as “Tir Khalas Zan” (literally, the Terminator). 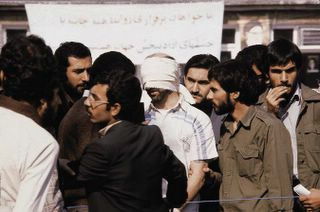 Ahmadinejad was one of the activists who swarmed over the embassy wall in 1979. The Americans were held hostage for 444 days.

A British journalist is also claiming that Mahmoud Ahmadinejad was a hostage taker back in 1979:

A veteran British journalist said that he had interviewed the newly-elected Iranian President Mahmoud Ahmadinejad back in 1979, when he was a leading activist who took over the United States embassy in Tehran, holding American diplomats hostage for 444 days.

I have a hard time with this article I found today… (Ahmadinejad and Bush: Separated at Birth? ) when Bush was a cheerleader and Ahmadinejad was scaling embassy walls and taking hostages!

Update 2: (4:00 PM)Captains Quarters is commenting and The Jawa Report has more incredible pictures of a younger Ahmadinejad during the Hostage Crisis with Iran.

Update 3: (10 PM) Looks like the story hit mainstream. Do you suppose Charles tipped them off?

A quarter-century after they were taken captive in Iran, five former American hostages say they got an unexpected reminder of their 444-day ordeal in the bearded face of Iran’s new president-elect.

Watching coverage of Iran’s presidential election on television dredged up 25-year-old memories that prompted four of the former hostages to exchange e-mails. And those four realized they shared the same conclusion — the firm belief that President-elect Mahmoud Ahmadinejad had been one of their Iranian captors.

“This is the guy. There’s no question about it,” said former hostage Chuck Scott, a retired Army colonel who lives in Jonesboro, Ga. “You could make him a blond and shave his whiskers, put him in a zoot suit and I’d still spot him.”

“He was extremely cruel,” said Sharer, of Bedford, Ind. “He’s one of the hard-liners. So that tells you where their government’s going to stand for the next four to five years.”