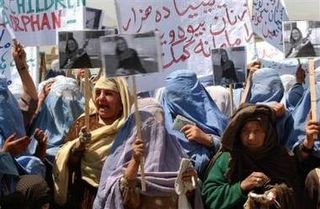 Afghan widows protest for the release of a kidnapped Italian aid worker in Kabul. As many as “10,000 widows” are helped by the CARE International agency where this woman works.

Afghanistan widows protested for the release of kidnapped Italian aid worker Clementina Cantoni who was taken fromm her car last month in Kabul. The woman works for CARE International and gives aid to roughly 10,000 widows throughout Afghanistan.

Afgha News reported that she is unharmed and a Fatwa was issued by a Cleric for her release:

The Afghan government says it is in contact with the kidnappers of an Italian aid worker and optimistic she will soon be released.

Interior Ministry spokesman Lutfullah Mashal told a news conference in Kabul today that the kidnappers have given assurances that CARE International worker Clementina Cantoni is unharmed.

“Although we have not talked with Clementina directly, the negotiators or the kidnappers have assured us of her safety and sound health,” Mashal said.

Afghanistan’s top religious scholars issued a fatwa yesterday calling for Cantoni to be freed and for the safety of legal foreign visitors.

Today Pope Benedict XVI called for the release of the hostage.