From Gulag to Guantanamo the World Leftists twist Reality…

The way that the MSM and the American Left is misrepresenting the handling of detainees and the Koran at Guantanamo you would be surprised to hear these startling facts:
(via Charles Krauthammer)
* Is there any other country that would give a prisoner precisely the religious text that that prisoner and those affiliated with him invoke to justify the slaughter of innocents?
* Al Qaeda operatives are trained to charge torture when they are in detention, and specifically to charge abuse of the Koran to inflame fellow prisoners on the inside and potential sympathizers on the outside.

(via Michelle Malkin)
* One detainee who claimed to have been “beaten, spit upon and treated worse than a dog” could provide not a single detail pertaining to mistreatment by U.S. military personnel.
* Another detainee claimed guards were physically abusive, but admitted he hadn’t seen it.
* The detainee said riots resulted from claims a guard dropped the Koran. In actuality, the detainee said, a detainee dropped the Koran then blamed a guard.
* In one case, Gitmo interrogators apologized to a detainee for interviewing him prior to the end of Ramadan.
* Each detainee’s cell has a sink installed low to the ground, “to make it easier for the detainees to wash their feet” before Muslim prayer.
* Detainees get “two hot halal, or religiously correct, meals” a day in addition to an MRE (meal ready to eat).
* Loudspeakers broadcast the Muslims’ call to prayer five times daily.
* Every detainee gets a prayer mat, cap and Koran.
* Every cell has a stenciled arrow pointing toward Mecca.
* Gitmo’s library is stocked with Jihadi books.

Also detainees have spit on and hurled water, urine and feces on the MPs.

Paul Mirengoff at Powerline adds this:

It is shocking, but not surprising, that major elements of the MSM and the American left are willing to accept pretty much at face value allegations of abuse by our sworn and dishonorable enemies, who are trained to lie about the conditions of their captivity, but not the responses of the American soldiers who have put themselves at risk trying to defend our country.

It will be hard for the American Left, if not impossible, to switch their thinking that “America is the Enemy” to “We are the Good Guys!” but this may help…

The next time you hear an America Hating Leftist rant about some concocted military abuse like a Koran being thrown into a toilet (which I don’t support but never did occur by the way! ) remind them of one of these atrocities … 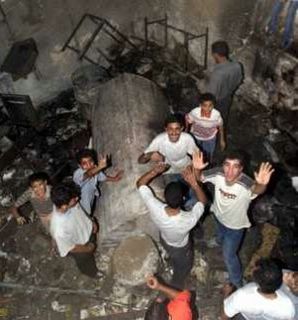 Palestinian looters at Joseph’s Tomb in 2000.

Jewish worshippers took part in something they had not been able to do for some time, they went to Joseph’s Tomb to pray this week. Granted the tomb is nothing of its former self before the Palestinians destroyed it in October of 2000:

Although Shechem (the site f Joseph’s Tomb) was handed over to PA control under the Oslo Accords, the agreements maintained the right of Jewish access to Joseph’s Tomb. The Od Yosef Chai (‘Joseph Still Lives’) yeshiva was housed at the tomb until the outbreak of the Oslo War, when it was overrun by local Arabs who set it on fire and set about smashing the shrine to rubble as Israelis watched on television.

Hyman reports that the destruction to the Jewish holy site was extensive and deliberate. “Someone said to me – look what they have done,” Hyman said. “We were standing in a pile of rubble and soot. The actual grave of Joseph looked like someone had had a go at it with a pick axe. Last time I was there, five years ago, it was all built up and Rabbi Hillel Lieberman [murdered by Arab terrorists shortly after Joseph’s Tomb was overrun –ed.] was showing us around.”

“It was an overwhelming shock to see it now,” Hyman said. “But I thought to myself, ‘it is not what the Arabs have done there that is so outrageous – it is that we allowed them to do it and are considering handing Shechem over to them once again.’ I mean you let a bull loose in a china shop and he’ll break the china.” 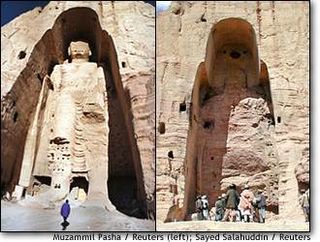 The Bamiyan Buddhas of Afghanistan in 1997 and again after the Taliban demolished the them in March, 2001.

Not to be outdone, the Taliban Regime made its own destructive mark on religious history in 2001:

Most likely built in the fifth or sixth centuries, the statues represented a classic blending of Greek and Buddhist art.

When Mahmud of Ghazni conquered Afghanistan in the 12th century, the Buddhas and frescoes were miraculously spared from destruction. Still, over the years Muslim iconoclasts hacked away at some of the statues’ details, mostly the facial features and hands.

Finally in 2001, after surviving intact for over 1,500 years, the Islamist Taliban government, claiming to be offended that UNESCO and foreign NGOs were putting resources into renovating these statues when there were, they felt, so many more pressing problems in Afghanistan, decreed that the statues were idolatrous and destroyed them with dynamite and tank barrages.

In March 2001 the two largest Buddhas were demolished after almost a month of intensive bombardment.

During the destruction, Taliban Information Minister Qudratullah Jamal lamented that, “this work of destruction is not as easy as people might think. You can’t knock down the statues by shelling as both are carved into a cliff; they are firmly attached to the mountain.”

Allah chiseled on the “Wailing Wall”

Earlier this year the Temple Mount, one of Judaism’s holiest sites was found vandalized:

It is suspected that Arab workers brought in by the Waqf Islamic authority, which controls the Temple Mount, are the culprits. Police feel they used stone cutting tools to engrave the word “Allah” into the stone, which is located about thirty feet off the ground.

The s
tone in question is located next to scaffolding brought in by Jordanian workers to prevent the collapse of the wall. The Temple Mount retaining wall was in danger of collapse after the Waqf engaged in massive and unsupervised excavations below the mount. The material dug out from beneath the mount was then mixed with refuse and discarded into the Kidron Valley.

Archaeologist Dr. Eilat Mazar of the Committee for the Prevention of the Destruction of Antiquities strongly condemned the vandalism. “They are supposed to be fixing and bolstering the wall, not carving names into the ancient structure,” the Hebrew University archaeologist told Arutz-7. “The Antiquities Authority and the police, as well, have failed to provide even elementary protection that is provided for any archaeological site, let alone the Temple Mount.”