A mosque bombing led to riots in Karachi on Tuesday.
*Political Leader Blames US*

“I think, the US is completely behind the incident because it wanted to overshadow the protests launched by the Muslims against the desecration of the Holy Quran on the same day”, MMA leader told Radio Tehran.

He added that the Bari Imam incident was also aimed at creating differences between Shias and Sunnis.

When asked about FBI offer to probe the incident, Allama Turabi noted US wanted to destroy the evidence as they did in General Zia plane crash case. 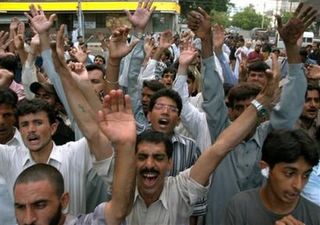 Shia Muslims gather in Karachi to protest the suicide bombing that killed five people on Monday night in a Shiite mosque. The mob then proceeeded to attack a KFC where 6 workers were killed in a fire.

Six bodies have been recovered from a fast food outlet set ablaze by an angry mob after an attack on a Shia mosque in Karachi, rescuers say. “They were apparently trapped in the burning building,” fire brigade chief Kazim Ali told the BBC News website.

Five people were killed and about 20 others wounded in the suicide attack on the Shia mosque in central Karachi on Monday night.

The victims of Monday’s mosque bombing included two people believed to have carried out the attack and a policeman.

A third attacker was injured and is in hospital.

Police say they have now identified him as Mohammed Jamil, a resident of Karachi. They say he is a member of the banned Jaish-e-Mohammed militant group.

Soon after the blast angry protesters set fire to a branch of Kentucky Fried Chicken.

Two petrol stations and several cars were also attacked as news of the mosque attack spread. 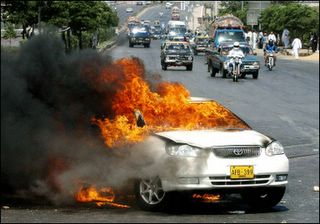 Shia Muslim protesters set a car, bank branches and gas station on fire along with a KFC where 6 people died today.

One terrorist blew himself up after a shootout with police:

A suicide bomber blew himself up during evening prayers at a Shiite mosque in the southern city of Karachi, injuring more than a dozen people, after a shootout that left another attacker, a police officer and a guard dead. A worshipper was also killed in the blast.

A crowd outraged by the attack went on a rampage afterwards, torching cars and shops nearby. Eight people were injured in Monday’s rampage. 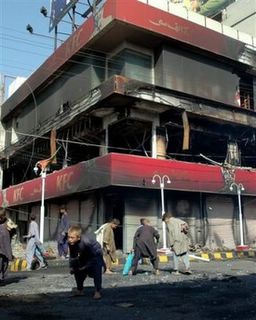 Street children sift through the ashes of a destroyed KFC in Karachi where six individuals died earlier today.

Four of the victims at the restaurant were burned to death, while the two others died after taking refuge in a refrigeration unit, senior police official Manzoor Mughal said. The six bodies were recovered Tuesday, bringing the overall death toll in the southern port city of Karachi to 11, he said.

Sunni Muslim extremists were suspected in the mosque attack, and it was unclear why KFC was targeted in retaliatory rioting, along with arson attacks on vehicles, shops, three bank branches and three gas stations.

The restaurant is heavily associated with the U.S. and rioters in Pakistan typically attack symbols of Washington while on a rampage.

Note- This AP article proceeds to explain this violence because “Musharraf allied his country with Washington in the war on terror after Sept. 11, 2001.” However, recent history points to anti-American violence long before 9-11.