VIDEO OF THE UZBEKISTAN SITUATION HERE 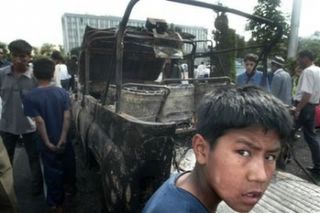 Gunfire echoed across the city on Saturday.

Soldiers in Andijan, eastern Uzbekistan, fired on the main square where about 5,000 people were demonstrating against Karimov’s government on Friday.

Soldiers fired in all directions, both in the air and at the crowd, as they drove several times through the centre in a lorry. The crowd fled in panic.

Half an hour after the first shots, more shooting could be heard and smoke was visible from the square. A helicopter flew overhead.

The brutal dispersal of the crowd followed the lightening seizure Thursday night by rebels of public buildings and a prison in fighting that left at least nine dead and 34 wounded, according to the government. 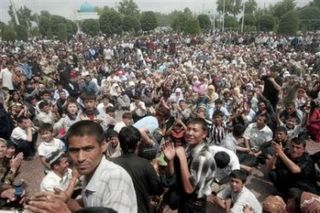 The protesters accused the government with using extremism charges to target entrepreneurs.

The protests followed a night break in of a prison where over 2,000 (and reports of up to 4,000) prisoners were released. One source said that Uzbekistan has near a 99% conviction rate for those arrested by the authorities. Some of those released were common criminals. AFP reported:

More than 2,000 prisoners were released in the raid, Saidjahon Zainobidinov, spokesman of the Appelatsia rights group in Andijan, told AFP.

Witnesses described their terror as the violence broke out in the dead of the night.

“The shooting started at 11:45 at night,” a kindergarten teacher, who asked not to be named, told AFP. “It was very close. I was afraid a bullet could hit my children. We didn’t sleep at all and everyone’s afraid.”

It was one of the most serious crises to shake the energy-rich ex-Soviet republic, which is run by an authoritarian government and hosts a major US air base used for operations in Afghanistan.

Andijan is near the border of Kyrgyzstan in the densely populated and impoverished Ferghana valley.

A journalist for the Ferghana news agency told AFP that a man describing himself as one of the rebel leaders said he had been one of those freed from prison but denied being connected to Islamic extremism.

“We are believers, nothing more,” he said, adding that he wanted Russian President Vladimir Putin to intervene.

He described himself as a businessman of 35, but would not give his name.

On Saturday, several families were not allowed to claim their dead which were stacked on a truck and brought to a nearby school:

Soldiers loaded dead bodies onto a bus in eastern Uzbekistan on Saturday after blocking families from collecting them, a witness said, as gunfire echoed across the city a day after troops opened fire on thousands of demonstrators.

A witness in central Andijan told The Associated Press that “many, many dead bodies are stacked up by a school near the square,” where soldiers on Friday put down an uprising that began when armed men freed 2,000 inmates from prison, including suspects on trial for alleged Islamic extremism.

She said soldiers early Saturday blocked friends and relatives from collecting about 15 dead bodies, and later loaded them onto a bus and took them away.

Fresh gunfire was heard in central Andijan Saturday, but the streets appeared largely quiet with most of the city’s 350,000 people in their homes. 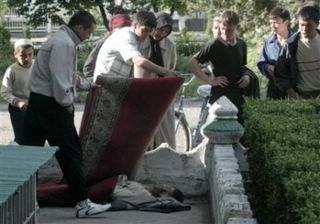 Family members were blocked from collecting their dead on Saturday.

The protests had been peaceful up to the crisis this weekend:

As buildings burned around them, the crowd chanted anti-government slogans until armoured vehicles and troops advanced and opened fire, killing up to 50 people, according to unconfirmed reports.

The main thrust of the storming operation was toward the administration premises, where an estimated 100 gunmen were barricaded in.

Uzbek media reported explosions from the building during the hour-long assault but there was no information about casualties inside.

The sudden eruption of violence capped weeks of peaceful demonstrations in Andizhan over the trial of 23 local businessmen on what supporters say are trumped-up religious extremism charges.

**Nathan at the Registan has interviews from people on the ground in Uzbekistan and video (courtesy of Andy from Siberian Light ) and audio of the uprising.**

Update: (Saturday 10:45 AM) Welcome to Instapundit and Lucianne readers and to Scared Monkeys for your kind words.

As many as 200 civilian casualties are being reported from the violence in Andijan yesterday:

Thousands of terrified Uzbeks waiting to flee across the border into Kyrgyzstan stormed government buildings, torched police cars and attacked border guards Saturday in a second day of violence spawned by an uprising against the iron-fisted rule of U.S.-allied President Islam Karimov.

The Uzbek leader blamed Islamic extremists for the revolt and said his troops were forced to shoot demonstrators Friday as they tried to break through police lines. Witnesses counted more than 200 civilians dead.

Karimov said 10 government troops and “many more” militants died and at least 100 people were wounded in Friday’s fighting in the eastern city of Andijan, which lies in the fertile but impoverished Fergana Valley, just a few miles from the Kyrgyz border.