Three Republican Senators urged Karimov’s Government to allow international inspectors in to investigate the reports of massacre in Andijan. The senators also said that the Uzbek government’s “harsh response” to the uprising in Andijan would impact relations between the two countries. 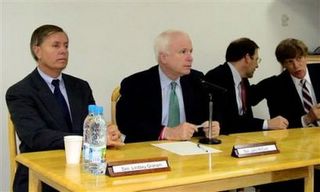 Senators Lindsey Graham (R-SC), John McCain (R-AZ) and John Sununu (R-NH) in the Uzbek capital of Tashkent (U.S. ambassador Jon Purnell at right) met with opposition leaders. The Karimov government would not meet with them.

In the strongest statements made by US officials since the massacre on May 13th, US Senators pushed the Karimov government ot allow international inspectors into the country amid new allegations of abuse of power:

In the strongest statement by US officials since Uzbekistan carried out a bloody crackdown earlier this month against a revolt and demonstration in the city of Andizhan, three US senators on Sunday called for an international investigation into the violence, and issued a stern rebuke to the authoritarian regime.

The senators’ statement came amid new details of the conduct of Uzbek security forces during and after the violence, including claims that injured victims have disappeared from hospitals, and that troops had fired on a civilian ambulance during the crackdown, killing three medical workers inside.

The accounts further undermine the insistence of Islam Karimov, Uzbekistan’s president and a US ally in the “war on terror,” that his troops operated with precision, and that armed men behind the revolt were responsible for the civilians deaths.

Uzbekistan now says 173 people, including 36 government troops, died in the uprising and crackdown on May 13. The government attributed the increase from the previous count of 169 to the deaths of four more troops from injuries suffered that day. 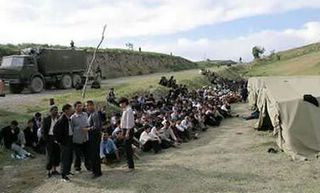 The US senators won assurances from Kyrgyzstan that the refugees would not be sent back to Uzbekistan.

Dozens of activists have been detained since the uprising in Andijan on May 13th:

Dozens of opposition activists have been detained by police in a new crackdown on dissent by President Islam Karimov’s authoritarian government in the wake of this month’s violent uprising in eastern Uzbekistan, an opposition leader and activists said.

Rights activist Surat Ikramov said he had received calls from numerous activists who either had been detained or were forcibly kept from leaving their homes. He said police were preventing him from leaving his home in the capital, Tashkent.

Vasilya Inoyatova, leader of the outlawed Birlik party, or Unity party, said that dozens of party members were arrested by police over the weekend.

“Within the last two days, police have detained dozens of our party members, saying we are hiding terrorists involved in the recent uprising in the Fergana Valley,” Inoyatova said by telephone from a Tashkent police station. 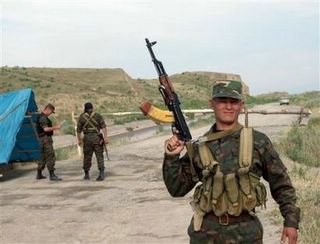 Last week Uzbek leader Karimov made his first foreign visit since the Andijan Massacre to China. Today, Pravda is saying that China is wanting the US to see that it is becoming a superpower, too:

The Chinese government expressed its total support to Uzbekistan’s leader. Chinese leader Hu Jintao called Karimov “an old friend of the Chinese nation.” The Uzbek president returned the favor and said that China was one of the most important powers in the world.

The sides signed 14 agreements during the visit, including the treaty on friendship and cooperation, an agreement about the creation of the oil joint venture (evaluated at $600 million.) Before setting for his five-day trip to China, Islam Karimov told reporters in Tashkent, the Uzbek capital, that he was hoping to attract up to $1.5 billion of Chinese investments during the forthcoming three or five years.

Hu Jintao stated that China respected the way that the Uzbek nation had chosen for its own development, and the efforts to defend the national independence, sovereignty and territorial integrity. It means that China will have no further objections if Karimov decides to take severe measures against the local opposition, Islamic extremists, first and foremost.

Like China, the USA is gradually establishing relations with Uzbekistan. However, Washington’s and Beijing’s attitudes to events in Andijan are completely different.

Nathan Hamm, the central Asian expert at the Registan has much more.

Update: After calling the Amnesty International report “Absurd!”, President Bush called for an inquiry into the Uzbekistan violence:

“We want to know fully what took place there in Uzbekistan, and that’s why we’ve asked the International Red Cross to go in,” Bush told a Rose Garden news conference.

“We expect all our friends — as well as those who aren’t our friends — to honor human rights and protect minority rights,” he added.

Update 2: Instapundit has linked to this latest Uzbekistan news about the Republican Senators trip to Tashkent.