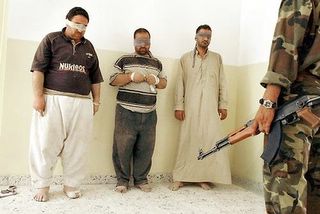 Yassin Shakir, brother Badr Shakir and Wisam Younis, tell of their role in a bombing of a Baghdad restaurant that killed at least eight. (AP)

Wisam Younis’ sole ambition in life, he said yesterday, is to kill Americans. So he claimed surprise when he discovered his car bomb had killed eight Iraqis and wounded more than 80 outside a Baghdad restaurant.

Younis and brothers Badr and Yassin Shakir are charged with murder and face the death penalty in the Monday attack.

“We did not know that the attack would target innocent people and we were deceived,” said Younis, barefooted and with bruised and swollen hands. He said they were taken in by enthusiastic ideas and money, adding that an insurgent leader promised $1,500 for the bombing.

“Our doctrine is to wage jihad against the Americans,” Younis, wearing a stained beige traditional robe, told an Associated Press reporter as police stood over him. “Driving out the occupiers is the demand of all Iraqis. … I wish to die in the battlefield instead of prison.”