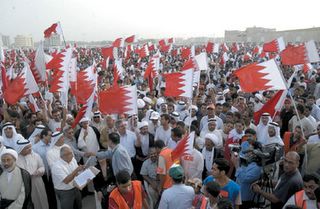 Protesters in Bahrain took to the streets again on Friday demanding that the king continue his reform initiative:

“Taking to the streets does not contradict dialogue with authorities… it complements it,” Sheikh Ali Salman, head of the Islamic National Accord Association (INAA), the main political formation of Bahrain’s Shiite majority, told AFP.

“The opposition is counting on the king to introduce constitutional amendments because he played a major role in the reform drive,” he said.