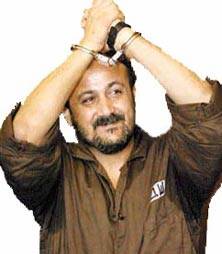 Terrorist Barghouti may campaign from a jail cell.

Several known terrorists are signing up to run in the upcoming Palestinian election:

Another terrorist wanted Al-Aqsa Brigade chief Jamal Abu Roub – who goes by the nickname “Hitler” – is running in the elections as well.

“Hitler” appeared in an interview with Fox News reporter Jeniffer Griffin, saying he expects to win a seat because he gives his people “dignity and safety.” Abu Roub publicly executed an Arab accused to helping Israel in front of the citizens of the Arab town of Qabatieh, in broad daylight. He has been running from Israeli security forces, but appeared in public to campaign, together with the Fox News reporter, assuming Israeli forces would not apprehend him while he spoke with a western reporter.