Iraqi Reaction to Saddam in Underwear… 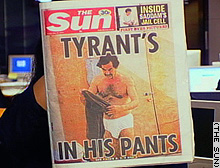 Saddam caught with his pants down.

Many Westerners have their “panties in a bunch” (you’ll have to excuse my sense of humor as it is late…) over the published photos this week of Saddam in his underwear. The Pentagon has already declared they will investigate this news leak. However, recent members in the “Coalition of the Free” have a different take on these photos. Kurdo from Kurdistan had this to say:

The greatest photo of the year.

I personally was scared from Saddam even in my dreams. I have seen this guy in my dreams and I have started to shiver.

To see this man (Sa’ed Al-Ra’es) (Mr. President) as he used to call himself like that in a pair of Iraqi underwear, is the strongest message for all his victims that it is time to live in peace for ever.

Omar at Iraq the Model had this to say:

I actually don’t think Saddam would mind being seen this way at all; back in the 1990s he appeared on the state TV wearing a swim suit smaller than the underwear he was wearing in the recent photos. And not only that, he was dancing in that “out fit”!

So if it was okay for him to appear half naked on TV when he was in power, I don’t think he would mind being seen the same way when he’s a prisoner and I really don’t understand the frenzy of his Jordanian attorney who described taking the photos as a crime!

That across the river swim became almost a national holiday as it marked the memory of the day when Saddam crossed the Tigris on his way to Syria after his flawed attempt to assassinate general Kasim (the 1st president in republican Iraq) back in 1959.

Many video clips of “patriotic songs” used snap shots from that dance to remind the people of how strong and fit their leader was, so it’s never a new scene for us here.

Anyway, I guess these pictures will have a greater impact outside Iraq rather than inside and whether showing them was with or against the law I believe it delivered another strong message to the small tyrants of the neighborhood and shook their image in the eyes of their people. I won’t be surprised to hear that someone from Egypt or Syria used photoshop to edit these photos and fit Mubarak’s or Asad’s face on Saddam’s body.