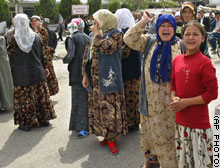 Korasuv women protest for release of Rakhimov and a “wrestler”.

About 200 demonstrators, mostly women, paraded banners demanding freedom for a self-proclaimed Islamist leader as well as a popular local wrestler in the town of Karasuv, which straddles the border between the Central Asian former Soviet republics of Uzbekistan and Kyrgyzstan.

Several hundred soldiers and riot police stood by as the protesters blocked the road leading to a bridge to the Kyrgyz side of the town, over the Sharikh Khansai canal.peThe protesters tried to get traders crossing the bridge to join them, one young man smashing the window of a car that was trying to get to the bridge, witnesses said.

They held placards proclaiming the innocence of the Islamist leader, a cattle farmer called Bakhtiyor Rakhimov, and the wrestler, Dilmorod Mamajanov.

“We don’t want anything but the freedom of these two – we have no other demands,” said one of Rakhimov’s relatives, named Anakhan…

…Yesterday US Secretary of State Secretary Condoleezza Rice reaffirmed US calls for a transparent, international inquiry, warning Tashkent, a US ally in the war on terror, could face international isolation should it fail to comply.

The Western-led Organisation for Security and Cooperation in Europe (OSCE) also called for an inquiry and said that Uzbekistan was not responding to OSCE efforts to mediate.

Uzbek authorities have refused to say whether they will let foreign experts look into the Andijan events, while criticising foreign media coverage as likely to inflame the situation. 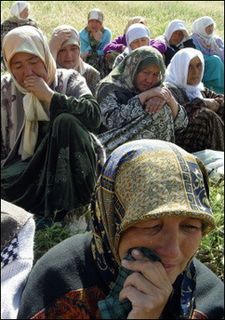 Compared to some of the unreasonable assessments of the situation, this article includes a roundup of the world’s discussion on the Andijan massacre.

The wife of jailed dissident Akram Yuldashev spoke of her husband to reporters from the refugee camp she fled to in Kyrgyzstan:

Among the refugees sheltering in a makeshift tent camp across the border from Uzbekistan is the wife of a jailed Islamic dissident the government blames for helping inspire religious extremism they say fueled a bloody uprising.

But Yodgoroi Yuldasheva said Friday that her husband, a student of many philosophers, simply wants “a society without poverty and joblessness, without crime and divorce.”

The revolt in the Uzbek city of Andijan on May 13 was triggered by the trial of 23 businessmen accused of religious extremism as members of Akramia, a group allegedly named after Yuldasheva’s husband Akram Yuldashev.

Yuldasheva and others, including Yudashev’s sister, Kibriyo Kodyrova, fled here after troops fired on protesters in Andijan. The Uzbek government put the death toll at 169; opposition leaders say more than 700 died.

Yuldashev, 42, was sentenced in 1999 to 17 years in prison for allegedly calling for the government to be overthrown in a pamphlet he wrote in 1994.

But Yuldasheva said her husband’s pamphlet only described his vision of how to create a just society where everyone would be rich and happy. “He longed very much for justice,” said Yuldasheva, wearing a long dress and a scarf over her hair.

A government expert at the trial concluded the pamphlet did not call for the government to be overthrown, but the court ignored that opinion, she said.

She also denied her husband had created any group. The businessmen on trial also denied being Akramia members, saying the government coined the name.

The US continues to push for an international probe into the massacre.

The UN says that Karimov has resisited such an investigation.

For more Uzbekistan updates check out these other sites…