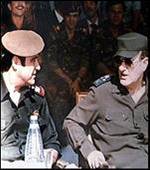 Brothers Rifaat (left) and Alfez al-Assad during the Alfez reign in Syria.

I was tipped off by reader Marlin that Amerji, a blogger in Syria, is pressing for the release of the Atassy 8 from prison in Syria. I want to lend my support to his cause. After you read more at his site you will understand why this is so important to him.

** Syrian Blogger says the time has come to press for the release of the Atassy 8.

You can read how you can help at his blog here.

Amerji is one of the founders of the Tharwa Project “an independent initiative that provides a free forum for the discussion of various issues pertaining to minority rights in the Arab World.”

Muhammad Raadoun, a Human Rights Leader in Syria was arrested in Syria this last week. In early May he spoke out against the regime in the death of jailed dissident Ahmad al-Masalma who he said had died due to a denial of basic health care…

Speaking to Aljazeera from Damascus on Sunday, the head of the Arab Organisation for Human Rights in Syria, Muhammad Raadoun, said that Syrian dissident Ahmad al-Masalma had died due to a denial of basic health care.

“The authorities considered his death fate but in fact by preventing al-Masalma from receiving the required medical care at the proper time they caused his death,” Raadoun said.

Al-Masalma was arrested on returning from 25 years’ exile in January 2005 and died in April.

An ex-member of the banned Muslim Brotherhood movement, the 65-year-old had returned to Damascus after receiving assurances he would be safe to do so.

His supporters said they had warned the authorities that al-Masalma needed special care because of heart problems. He was released to undergo a heart operation but died in hospital.

After this interview with Aljazeera, Mohammad Raadoun was arrested by Syrian authorities on Sunday (May 22):

Syrian security forces raided local offices of an Arab human rights group early Sunday (May 22) and arrested its leader, according to a statement by the group.
The Arab Organization for Human Rights said security forces broke into Mohammad Raadoun’s office in Latakia and took him by force to one of the government’s security agencies.

On Saturday, the group accused authorities of detaining six people on charges of belonging to the banned Muslim Brotherhood movement, and torturing one of them.

Rifaat Assad, who went into exile after a failed coup attempt in the mid-1980s, told The Associated Press that he wants to return home to remove the dictatorial regime led by his nephew and help bring democracy and economic prosperity — even though he claims he risks assassination.

“I have nothing but love for my nephew,” he said during a more than four-hour interview Friday at his office in Marbella in southern Spain. “But I have condemned the way he rules.”

** Dissident Parties are calling for demonstrations against the Assad Regime

Syrian dissident parties — some close to former Syrian Deputy President Rifat Al Assad — have called for demonstration against the country’s policies. They also urged the foreign ministries of the European Union countries to withdraw their ambassadors from Syria.

The Arab People’s Democratic Party (APDP), whose secretary-general is Somar Rifat Al Assad, and the Washington-based Alliance for Syria, headed by Dr Mohammed Al Jubaili, and the German-based Modernity and Democratic Party, issued in Paris on Wednesday a statement in which they criticised “the continuous arbitrary arrests, the suppression of general rights under the state of emergency, the reckless security policy, and terrorism in Syria by the arrest of members of the Attasi Forum for National Dialogue and Mohammed Radoun, a renowned lawyer.”

The statement cited letters sent to foreign ministries of the European Union urging them to “withdraw their ambassadors from Damascus, freeze diplomatic ties with the Syrian regime, summon the Syrian ambassadors in their countries, and present to them official petition.”

The statement added: “We shall launch TV campaigns in collaboration with the Arab News Network to gather one million signatures via e-mails which shall be listed and submitted to the EU leaders.

“This will be done in addition to organising a number of sit-ins in front of embassy premises in all European countries.”

Update: (9:30 Sunday AM) Instapundithas linked to this news of Syria’s crackdown.