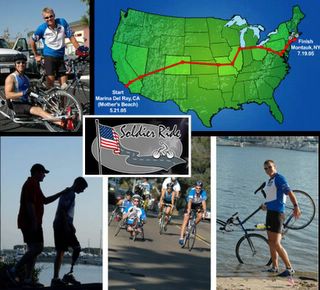 Riding to Support Our Wounded Soldiers

The Soldier Ride 2005 to support wounded soldiers takes off this weekend from Los Angeles. Soldier Ride was formed by a group of people from East Hampton, New York who came together to show their support towards the members of our armed forces who have sacrificed so much for this country.

In 2004 one of our members, Chris Carney, cycled across America to raise money and awareness for The Wounded Warrior Project, a nonprofit organization, founded by John Melia, a former US Marine who was injured in a helicopter crash in 1992, to assist the new generation of severely injured servicemen and women.

Together, Soldier Ride and the Wounded Warrior Project have reached thousands of wounded servicemen and women, providing comfort items, counseling, and rehabilitation to aid in the transition from a hospital bed to an independent life at home. Our work begins right at the hospital bedside of the most severely injured as they undergo treatment and rehabilitation in Department of Defense hospitals.

The ride begins at the Marina Del Ray “Mother’s Beach” in Los Angeles, CA on May 21, 2005 and ends in Montauk, New York on July 19, 2005. These courageous men will lead the Soldier Ride National Tour Team across the heartland of America. Along the way they will be joined by fellow wounded warriors who will help them relay Soldier Ride’s message of hope, courage and determination across America.

You can help by:

Donating to a Wounded Soldier Here
Register to Ride!
Sponsoring a Biker
Spreading the Word!

If you think that you can handle riding for one of the stages here is the schedule:

Los Angeles, CA – May 21, 2005
The ride begins at the Marina Del Ray “Mother’s Beach”. For “street by street” details of the route in Los Angeles, please CLICK HERE. Tony Snow will join the National Tour Team on this first leg of the race.

It seems that indomitable spirit and determination are not limited to Chris Carney and the wounded soldiers who will accompany him on Soldier Ride 2. Tony Snow of Fox News, who provided such great coverage of last year’s ride, will do a portion of this year’s ride in spite of the fact that he is recovering from very serious colon cancer surgery. We look forward to his participation and to his reports.

Soldier Ride 2005 will be a part of the pre-game show at Dodger Stadium. Heath Calhoun will throw the first pitch at the game. Fox News will be there with a Live Remote.

Colorado Rockies pre-game show – Chris and 5 others will be on the field for this event. More than 50 riders are scheduled to join the ride for this segment.

Yes! Please email me if you would like to meet up with the riders at
midwestjim at charter dot net