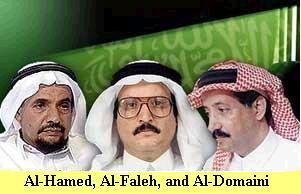 In an earlier post here I discussed the case of three democracy advocates in “The Kingdom” who were imprisoned for “leading a charge for a constitutional democracy”. Their court date was moved back many times over the last year for the prosecution to build their case.

The three were to be tried in August of last year, the date was pushed back to December when 9 journalists and family members were arrested for attempting to attend the trial. The trial was then postponed until February and then again pushed back to Saturday, March 12th. Well, today the case was finally decided. Here is some background to the case:

Only two members of the seven-strong defense team continue to attend hearings as four were dismissed by the judge and another was arrested.

The crackdown on constitutional reformists has cast doubt on the government’s attempts to introduce limited reforms, claimed to fit Saudi specifications rather than following a Western pattern.

This is what their attorney had to say:

Before he was arrested!

Today the three political activists were convicted and sentenced from six to nine years in jail!

A Saudi court jailed three prominent reformists on Sunday for up to nine years for trying to sow dissent and challenge the royal family, dealing a blow to tentative reforms in the absolute monarchy.

Judges at the Riyadh court, which was ringed by security forces, issued their verdict after a nine-month trial held mainly behind closed doors despite earlier promises of openness.

The court sentenced academics Ali al-Dumaini to nine years in jail, Abdullah al-Hamed to seven years and Matruk al-Faleh to six years, lawyers said. All three were arrested in March 2004 after petitioning the kingdom’s rulers to move toward a constitutional monarchy and speed up political reforms.

Their arrest — along with nine other men who were later released — drew rare public criticism from the United States which has pushed for reform in ally Saudi Arabia since the Sept. 11 attacks, which were carried out by mainly Saudi hijackers.

“This is not fair,” Faleh’s wife Jamila al-Ukla said after the sentences. Her husband supported “the centrality of the royal family, the country and Islam,” she said. “(To call for) constitutional monarchy is not a criminal issue.”