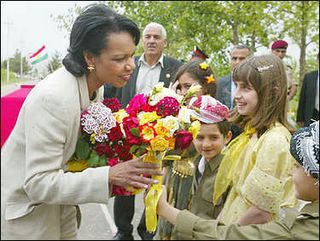 Condoleezza Rice receives flowers from Kurdish children on her surprise visit to Iraq.

Condoleezza Rice on a visit to Iraq took time to condemn the violence in Uzbekistan:

Rice’s comments about Washington’s ally in its war on terrorism were the strongest from the United States after Friday’s bloodbath in the town of Andizhan, where troops fired at protesters, killing 500 people according to some estimates.