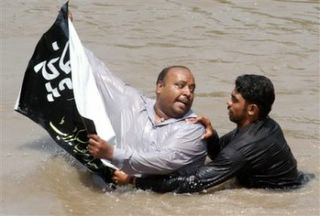 Rounding up the “Raging River” Protesters

Protesters got creative yesterday in Lahore Pakistan for an anti-government protest:

The Shahbaz Sharif Secretariat on Wednesday came up with a novel idea of staging a protest demonstration in the city’s canal to mark the first anniversary of PML (N) President Shahbaz Sharif’s forced return from Lahore Airport.

The police and local administration were surprised to see the protesters holding placards and chanting anti-govt and pro-Shahbaz’s slogans while standing in the canal water near The Mall bridge. The protest demonstration attracted a large number of passers-by that created traffic problems. The police resorted to baton charge to disperse the demonstrators.

The policemen jumped into the canal to arrest the PML-N workers that resulted in a scuffle between protesters and policemen. However, the police managed to take them out and also arrested them.