The French rule out an exit from Myanmar. 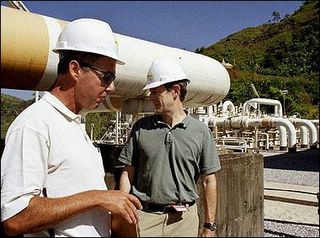 Workers for the French oil giant Total pumping gas out of the military junta.

The French refuse to cut ties with the military junta of Myanmar which has acivists creaming “Blood for Gas”:

The protests outside the French embassy in Washington and consulates in five other cities on Wednesday were to coincide with a shareholders meeting in Paris of French energy giant Total, which has vast investments in Myanmar’s gas industry.

The European Union had imposed investment sanctions against Myanmar in October last year but activist groups claimed the oil and gas industry was exempted from the ban following pressure from the French government allegedly to protect Total.

“The French government should practice what it preaches on democracy and human rights. By protecting Total, it is shielding the Burmese military dictatorship as it commits human rights violations, said US Campaign for Burma (USCB) co-founder Aung Din.

Burma is the old name of Myanmar, where democracy icon Aung San Suu Kyi is under house arrest.

Fifteen protesters carried placards and shouted slogans “No more Burmese blood for gas” and “Where’s your support for Aung San Suu Kyi?” in front of the embassy in Washington.

“France has repeatedly fought, diluted, and otherwise tried in every possible way to undermine support for human rights in Burma solely to protect the interests of Total Oil’s operations in the country,” said Aung Din, a former political prisoner and co-founder of US Campaign for Burma. “It is time for France to change its Burma policy, which is nothing short of blood for gas.”

Total Oil is Europe’s biggest corporate investor in Burma. The company signed a 30-year US $1 billion contract in 1992 to buy natural gas from Burma’s state-owned Myanmar Oil and Gas Enterprise. Critics of the deal claim entire villages have been relocated to make way for a pipeline from the gas fields and that villagers are also being forced to work on the project.