On your mark… get set… 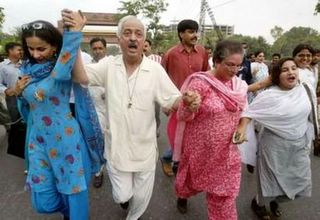 Human Rights Activists off and running in a mixed sex road race in Lahore, Pakistan.

Defying a ban on men and women running together in the eastern Pakistani city of Lahore, some 300 people from both sexes took part in a road race yesterday that was more about politics than athletics. (obviously!) 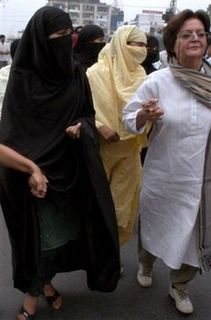 A veiled runner in the mixed sex race for Human Rights in Pakistan!

The BBC also reported on the Lahore race:

Hundreds of Pakistani rights activists have held a mixed-sex road race in Lahore in protest at a ban on men and women racing alongside each other.
The authorities had pledged to halt the 1km race, but police stood by and let it proceed. They used force to break up a similar event last Saturday.

Rights activist Asma Jehangir said it was a victory for law and order.

Radical religious demonstrators, who oppose women running in mixed races, were kept back by police. 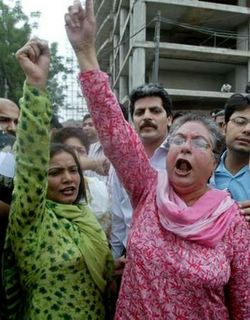 Cheering and chanting at the mixed-sex road race.

A Pakistani activist had vowed to hold the race the day before.

Asma Jehangir, the former chief of the Human Rights Commission of Pakistan made her remarks less than a week after police detained dozens of rights activists in Lahore to stop them from holding a race.

Authorities have banned women from competing in foot races since April when Islamic hard-liners, who regard women’s participation in sports as against Islam, attacked runners at a similar event in the industrial city of Gujranwala.