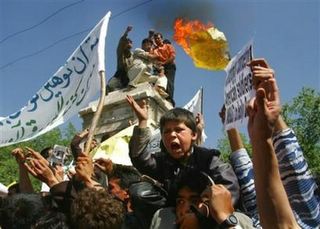 Sorry to be so crude, but,… Afghanistan does too!

Afghanistan’s government said Tuesday that Newsweek should be held responsible for damages caused by deadly anti-American demonstrations after the magazine alleged U.S. desecration of the Quran, and it suggested that foreign forces may have helped turn protests violent. Pakistan joined the international criticism of the magazine’s article and said Newsweek’s apology and retraction were “not enough.”