The Clintons are making more headlines with yet another scandal and yet another associate sits in prison while another may join him. This news puts the “hurts” on Hillary’s presidential run but will it be enough? 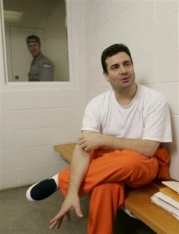 Another former Clinton aquaintance serving time, Aaron Tonken
her
Campaign donations made more than four years ago at a celebrity-studded Hollywood gala have led to a federal criminal trial against a former finance director for Sen. Hillary Rodham Clinton that could hamper her future campaigns.

Clinton hasn’t been linked to charges that the cost of the event was vastly underreported, but Republicans will be watching for any ammunition they can use against the Democrat, considered an early front-runner for the 2008 presidential nomination.

David Rosen, who was Clinton’s finance director during her 2000 U.S. Senate run, faces three counts of filing a false statement. An FBI agent speculated in an affidavit that Rosen was trying to duck federal financing rules so the campaign would have more money to spend on other expenses.

Rosen pleaded not guilty in January. He could face up to 15 years in prison and $750,000 in fines if convicted.

The party, called a “Hollywood Gala Salute to President William Jefferson Clinton,” included both a dinner and a concert. About 350 people accepted invitations to both, which cost $25,000 a couple. About 1,200 people purchased $1,000 tickets just for the concert.

Many people got complimentary tickets and campaign reports never gave a full accounting of the total money taken in. However, organizers reported raising nearly $1.1 million for a joint committee benefiting Hillary Clinton’s Senate campaign and the national and state-level Democratic parties.

For all of the latest to this latest scandal, check out www.HillCAP.org .