US magazine Newsweek has changed its policy on using unnamed sources, a week after it was forced to retract a report blamed for riots in Muslim countries.
The magazine says that in future anonymous sources will only be used with the approval of top editors.

Newsweek’s editor-in-chief apologised for the retracted article that claimed the Koran had been desecrated by interrogators at Guantanamo Bay.

But, they didn’t say anything about if this would apply overseas… 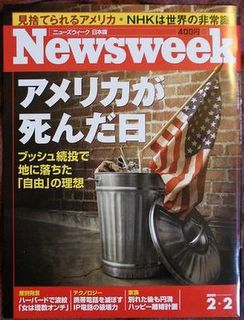 This Cover posted at Little Green Footballs from the States and Silent Running from Australia/New Zealand of Newsweek’s latest magazine cover in Japan just tells the whole sordid story… Newsweek can blather all they want about how they mean well, do responsible reporting, sourced the sources, blah-blah-blah… but it’s hard to talk your way out of this one. They must have decided that if it didn’t work here in the States, they would try it somewhere else. But, once again they forgot about the blogs and the internet.
Of all the bum luck!