With the Newsweek debacle in the background, liberals picked the wrong weekend to convince the public that they are victims of a conservative media dominance. 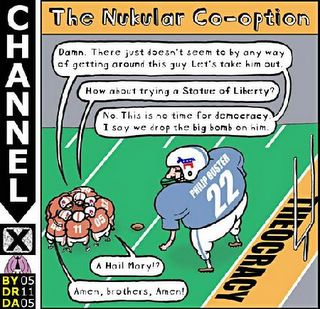 Those awful “praying” Republicans heading for the “Theocracy Goal Post”

Keynote Speaker Bill Moyers led a “Who’s Who List” of liberal commentators at this year’s National Conference for Media Reform held in St. Louis this past weekend.

Bill Moyers denounced on Sunday the right wing and top officials at the White House, saying they are trying to silence their critics by controlling the news media.

He also took aim at reporters who become little more than willing government “stenographers.” And he said the public increasingly is content with just enough news to confirm its own biases. 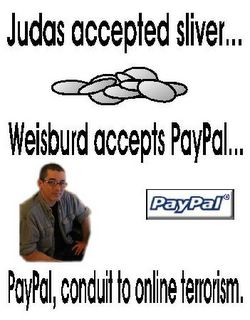 Judas had a “Sliver”… Ouch!

Moyers answered for the first time recent charges that public television in general and he in particular have become too liberal.

Those charges are from Kenneth Tomlinson, chairman of the Corporation for Public Broadcasting, and, in effect, Moyers’ boss at the network.

Tomlinson, a Republican, paid an outside consultant $10,000 to keep track of the political leanings of guests on Moyers’ show, “Now.” Moyers left the show last year but is back on public television as host of the series “Wide Angle.”

Tomlinson, on the recommendation of administration officials, hired a senior White House aide to draw up guidelines to review the content of public radio and television broadcasts, according to a report in The New York Times on May 2. 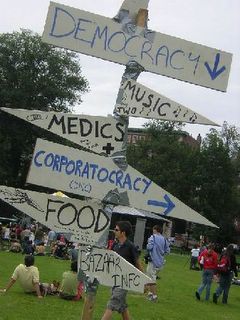 This and the other photos on this post come from the STLIMC website, a blog following the conference, and is titled (I kid you not):
“Signs at the 2004 Republican Convention in Boston”

Tomlinson complained that Moyers’ show was consistently critical of Republicans and the Bush administration. He said there was a “tone deafness” at PBS headquarters on issues of “tone and balance.”

“The more compelling our journalism, the angrier became the radical right of the Republican Party,” he said.

“That’s because the one thing they loath more than liberals is the truth. And the quickest way to be damned by them as liberal is to tell the truth.” 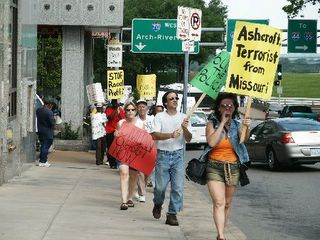 I believe that “Ashcroft” was replaced in January.

Moyers’ speech was interrupted by standing ovations at the Conference for Media Reform here over the weekend. More than 2,500 people attended the three-day conference.

Moyers said right wingers had attacked him after he closed a broadcast by placing a flag in his lapel.

It was the first time that he had worn a flag. He said he put it on to remind himself that “not every patriot thinks we should do to the people of Baghdad what bin Laden did to us.”

“An unconscious people, an indoctrinated people, a people fed only partisan information and opinion that confirm their own bias, a people made morbidly obese in mind and spirit by the junk food of propaganda is less inclined to put up a fight – ask questions and be skeptical.”

(I couldn’t have said it better myself! Nice to see we agree on one thing!)

Moyers was a last-minute addition to the conference. He finished writing his hourlong speech 20 minutes before he spoke. His ending was nearly drowned out by a blaring fire alarm that went off by mistake. 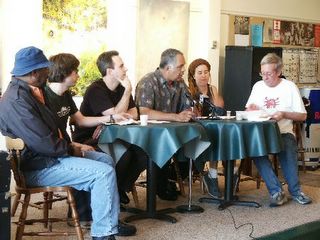 As the weekend concluded, the attendees shared the following thoughts:

The conference ended Sunday, and some who attended said they were still unsure what reforming the media means.

“It’s true that no one laid out a battle plan,” said Mercedes Lynn DeUriarte, an associate journalism professor from the University of Texas at Austin.

Update: (11:30 PM) Lorie Byrd at Polipundit agrees that the timing for this event could not have been worse.