The news yesterday made it sound as if throngs were attacking Laura Bush as she visited the Holy Sites in Jerusalem.

* SEE FOR YOURSELF HERE *

The above video also states that US foreign policy caused the disturbance… Yet, the biggest rally Laura ran into was the Jewish Rally at the Western Wall for the release of a convicted Israeli spy held in the US.

Clearly, this rally was not due to the Bush Doctrine.

The really Wonderful Under-reported News of the weekend was the historic talk Laura Bush gave at the World Economic Forum Dinner in Jordan promoting women’s rights and noting the exciting changes occurring in the Middle East which I have a clip of below. 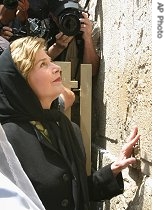 Laura Bush touches the Western Wall in Jerusalem on her visit to promote women’s rights in the Middle East.

Before continuing her trip to Jerusalem today, Laura Bush gave a moving speech yesterday in Jordan pleading for the rights of women and noting recent accomplishments on her Middle East tour :

First lady Laura Bush challenged a region dominated by men and strong tradition to allow women into the political process and workplace, saying yesterday that equal rights are essential for democratic progress in the Middle East.

The first lady, making a high-profile speech at the World Economic Forum, said new freedoms granted to the women of Afghanistan, Iraq, Kuwait and Morocco prove equal rights are compatible with Islam and Arab culture, informs the Seattle Times.

Bush, on a diplomatic mission to try to improve America’s image in the Arab world, said education and women’s rights were two pillars of a vibrant democracy.

In a 20-minute speech, she said world leaders must allow students, men and women, to study freely in modernized educational institutions.

“As freedom becomes a fact of life for rising generations in the Middle East, young people need to grow up with a full understanding of freedom’s rights and responsibilities: The right to discuss any issue in the public sphere, and the responsibility to respect other people and their opinions,” she said. 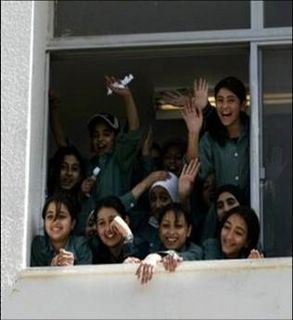 High School girls in Jordan wait to greet Laura Bush to their school.

Laura Bush visited Israel today on her tour to push for women’s rights in the Middle East. She was greeted by relatively few protesters at her stops in Jersalem:

First Lady Laura Bush, on a political fence-mending tour of the Middle East, found herself the target of a tension- filled protest in Jerusalem on Sunday at one of Islam’s holiest sites.

After a brief tour of the Dome of the Rock mosque, about 40 or 50 protesters surrounded Bush and her U.S. Secret Service detail as they departed, pushing to get closer and shouting: “How dare you come here” and “You don’t belong in this mosque.”

As Secret Service agents shadowed her, Israeli security guards linked arms and forced a pathway for the first lady’s entourage through the crowd to Bush’s motorcade.

The site is Islam’s third-holiest, and is built on a hill in Jerusalem known to Jews as the Temple Mount and to Muslims as the Haram al-Sharif — or the Noble Sanctuary. The hill also is believed to contain the ruins of Judaism’s holiest temple. 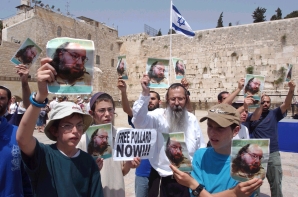 Laura later responded to the events of the day (you can see that in the video above) and appealed for peace:

The disturbances during her trip to the Jerusalem holy site showed “what an emotional place this is as we go from each one of these very, very holy spots to the next,” Bush said later during a stop in the West Bank oasis town of Jericho.

“We’re reminded again of what we all want, what every one of us prays for…what we all want is peace,” said Bush, who in Jericho heard complaints from Palestinian women about Israeli occupation policies such as roadblocks.

She said the chance of achieving peace “right now … is as close as we’ve been in a really long time. It will take a lot of baby steps and I’m sure (there) will be a few steps backward on the way.”

Laura met with women leaders yesterday in Jordan on her trip to encourage women’s rights and education.

Update: Jackson’s Junction has more on the “ambush” here.

Update 2: For more on Laura Bush and her historic Middle East tour, go here or here.