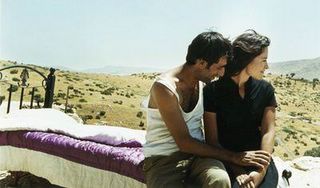 “Kilometre Zero” is the first Iraqi film in the Cannes Festival.

The first ever Iraqi-made film to be shown at Cannes Film Festival this week is entered into competition. The film deals with the hardships of the Kurdish people in Saddam’s Iraq, so it could be a great flick…

“Kilometre Zero” is the first Iraqi film competing at the Cannes Film Festival. Director Hiner Saleem, an Iraqi Kurd who fled the country as a teenager, returned to his homeland to shoot the movie after Saddam’s fall.

Set in 1980s Kurdistan during Iraq’s war with Iran, “Kilometre Zero” is a road trip movie about a Kurd and an Arab asked to return the body of a fallen soldier to his family. It touches on some of the hardships of the Kurdish people, who were oppressed, often brutally, under Saddam’s regime.

Since only a handful of films have ever been made in Iraq, there were many challenges to shooting there, the director said Thursday.

“One day the problem was, how to find a camera?” he said. “In the whole country, I didn’t find one.”