Israelis protest the settlement disengagement plan by the government.

VIDEO OF THE PROTESTS HERE 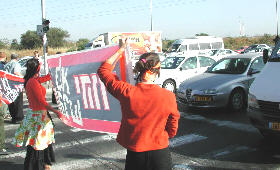 Protesting the Disengagement of the settements in Gaza.

“If you’re arrested, you’ve won!” was the slogan of Monday’s mass protests. Over 400 Israelis were arrested in acts of nationwide civil disobedience, in which 30 major thoroughfares were blocked.

An army of orange – the color of the anti-disengagement struggle – took to the streets, outsmarting and outmanning close to 4,000 police officers stationed across the country. This was the first round of major protests aimed at derailing the proposed disengagement plan this summer. Streets were closed, and traffic paralyzed for up to an hour in Jerusalem, Tel Aviv, Be’er Sheva, Haifa and elsewhere.