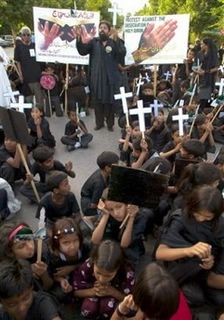 J. Salik, a concerned Pakistani Christian Leader protests in front of the UN office in Islamabad against Quran abuse. Christians are concened of backlash from the reported Quran abuse stories.

Pakistan, alongwith rest of the Muslim World would observe a wild protest against the sacrilege of the Holy Quran by the bigoted and insane American Military personal of Guantanamo Bay, on Friday, after Juma Prayers.

In Pakistan, these protests will be held on the mass appeal of MMA. Rallies and public gatherings will be held in all the cities of Pakistan.

The biggest protest rally of Pakistan will take place in Islamabad, which will be led by the President of MMA Qazi Hussain Ahmad. The Lahore Rally will be led by MMA Deputy Parliamentary leader Liaqat Baloch, Peshawar Rally by Leader of the opposition Maulana Fazl-ur-Rehman, Quetta Rally by Maulana Abdul Ghafoor Haidri, Karachi Rally by the Provincial Ameer of Jamaat-e-Islami, Syed Munnawar Hussain.

The Females and children belonging to the MMA polity will also take an active and full part in the Rally. The Islamabad rally will start after Juma Prayers from Abpara Chowk and terminate at the Parade Ground in front of Parliament House.

The participants/Organizers have assured this as a peaceful event, and this was to remind the world of sanctity and importance of the Holy Quran. Qazi Hussain Ahmed wants the American Government to ‘hand over the culprits to us for meting out justice’.

Update: (6:30 PM) I am just wondering if this news will put a halt to the planned protests tomorrow? Probably not, I mean, what do you do with all of those papier mache’ Bush head’s, except burn them up for the cameras…