This Sikh rally was particularly significant because you don’t see many pictures coming from “protests against terrorism” in this part of the world. Besides the Hilla Protests this spring in Iraq, the Lebanese protests of Christians and Muslims, or any other Iraqi protest, when was the last time you saw a Middle East or Asian protest against terror? 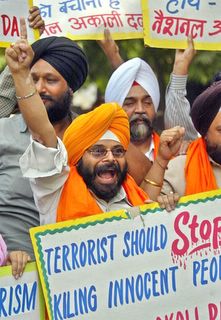 Bombings at a movie theatre in New Delhi appear to be the work of terrorists, says the government:

India’s defence minister said weekend cinema blasts in New Delhi that killed one person and injured 49 appeared to be the “handiwork of terrorists” as police moved away from initial theories the bombs were planted by angry Sikhs.

“India will not compromise with terrorists. Our country and people will deal with the challenge effectively … such anti-social elements are out to destroy and will be dealt with strongly,” Singh told reporters at a news conference Tuesday.

No group has claimed responsibility for the blasts in the heart of the capital’s shopping district late Sunday. 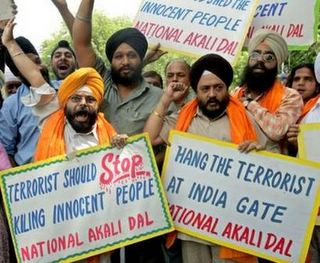 The protesters were condemning the terrorist strikes on movie theatres in New Delhi:

Activists of National Akali Dal party shout slogans against terrorism during a protest in New Delhi, on May 23, 2005. A series of blasts killed at least one person and wounded 50 in New Delhi on Sunday evening at two theatres showing a film condemned by Sikhs.