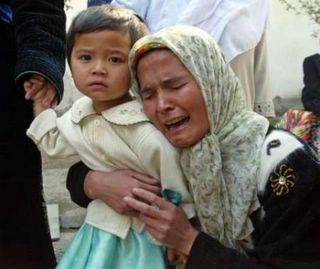 The wife of a slain protester embraces her daughter during funeral services in Uzbekistan’s eastern town of Andijan on Sunday.

The death toll in Uzbekistan is much larger than originally reported. If there were 2000 to 4000 at the protest in the city of Andijan, then that would mean 1 of 4 or 1 of 8 were shot dead by the government officials:

About 500 bodies were laid out in the nearby city where troops fired on a crowd of protesters, a doctor said.

Residents’ accounts of the fighting in Tefektosh could not be independently confirmed, but blood stains were visible on the pavement there.

The village is in the same region as Andijan, where troops fired on a crowd of protesters Friday to put down an uprising, killing hundreds, witnesses said. On Sunday, about 500 bodies were laid out in rows in Andijan’s School No. 15, a doctor in the town said.

The doctor, who spoke by telephone on condition of anonymity, said the school was guarded by soldiers and residents were coming to identify dead relatives.

The doctor, considered knowledgeable about local affairs, said she believed 2,000 people were wounded in Friday’s clashes, but it was unclear how she arrived at her estimate.

Abdugapur Dadaboyev, an Uzbek rights activist who visited Andijan on Saturday, said he saw dead bodies in police and military uniforms lying in the streets. Civilians’ bodies, in contrast, were quickly removed from the streets, he said.

Russia’s state-run Channel One television showed footage of uniformed men with rifles slung over their shoulders carrying a corpse toward a truck and of a dead man lying face-down on a street, his head thrust between the bars of a fence and his legs still straddling an old bicycle. It said the video was shot Saturday.

Following the day of violence in Andijan, some 5,000 angry protesters swarmed the streets of the border town of Korasuv on Saturday, looting and burning official buildings, torching police cars and assaulting local officials.

Participants in the protest accused the government of failing to improve living conditions. The town that straddles the river border was split in two following the 1991 Soviet collapse, and Uzbek officials dismantled a bridge two years ago as part of their effort to impose new restrictions on traders. 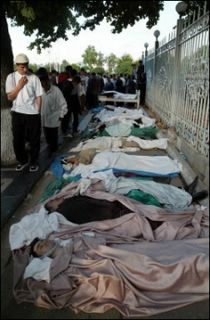 Claiming the dead in Andijan.

Talk of a revolution:

First there was a “rose” revolution, then an “orange” one, but while the “green” or Islamic revolt some see brewing in Uzbekistan may share a basic thirst for democracy, the outcome could be radically — and tragically — different, analysts said.

The “people power” revolts in Georgia 18 months ago, then Ukraine last December caught the world’s imagination.

In both cases, huge, peaceful crowds forced the resignation of corrupt, vote-rigging governments. In came new, younger, Westward-looking leaders who vowed to put their ex-Soviet republics in the European Union and the North Atlantic Treaty Organization.

Then in March, a revolt that was part-coup, part-uprising swept Uzbekistan’s neighbour, Kyrgyzstan, underlining how vulnerable many of the ex-Soviet Union’s current leaders are.

The people of Andijan, in eastern Uzbekistan’s impoverished and crowded Ferghana Valley, also say they are fed up with President Islam Karimov’s iron-fisted rule.

But unlike in the previous revolutions, the Uzbek protest — sparked by anger at the trial of 23 men accused of belonging to an outlawed Islamic revolutionary group — soon turned deadly with an armed raid on the local prison and public buildings.

In 2003, Georgia’s leader Eduard Shevardnadze refused to order police to shoot at rose-waving crowds. In 2004, Ukraine’s security forces melted away in the face of the orange-clad masses. But Karimov had no qualms about spilling blood.

In the swift and brutal counter-attack, his troops not only scattered the rebels, but shot down unarmed demonstrators. Witnesses spoke of hundreds killed. AFP correspondents saw around 50 dead bodies (although the number is up to around 500 at this time).

Karimov blamed Islamic extremists for the unrest — men a far cry from the English-speaking pro-democracy leaders who took power in Georgia and Ukraine.

**For more information, the Registan is continuing to follow the situation in Uzbekistan.**