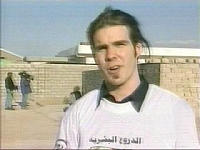 Ryan Clancy, 28, filed a lawsuit against the Treasury Department in federal court Thursday.

The department alleges Clancy went to Iraq in violation of sanctions and offered his services to the Iraqi government to shield its facilities from possible military action.

The American Civil Liberties Union said Clancy was not “trading with the enemy” or providing services to the Iraqi government.

“People go as part of making a statement that there are human beings here and before the bombs drop you should think about what you are doing,” said Larry Dupuis, ACLU Wisconsin’s legal director.

More on Ryan Clancy here, including this…

* Ryan Clancy says he knew he could be punished for traveling to Iraq to protest the war there, but he had no idea how much the trip could ultimately cost.

* Although travel to Iraq has been prohibited for more than 10 years, officials just started enforcing the ban six months ago, said Arthur Heitzer, a Milwaukee attorney and expert on international travel sanctions.

* Clancy used frequent flier miles and $1,500 in savings to go to Iraq.

* “I went out of concern for our country, as well as the rest of the planet,” said Clancy, a former Peace Corps volunteer. “The U.S. was interfering in an extremely destructive way, punishing Saddam’s victims and breeding more terrorists.”

* On the trip home, he went 80 hours without sleep and was interrogated by officials at airports in both Israel and Minneapolis. Once he made it home, he was temporarily banned from commercial air travel.