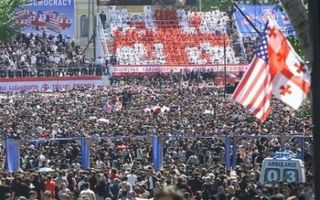 Waiting for Bush in Freedom Square

Wow, these are the moments that define the epic story of George W. Bush!

George and Laura Bush were treated like rock stars in the fledgling democracy of Georgia today. And, George gave one of his amazing speeches to the people of this former Soviet State. A few of my favorite lines:

“Your courage is inspiring democratic reformers and sending a message that echoes across the world: Freedom will be the future of every nation and every people on Earth,” Bush said in speech from the Freedom Square that symbolizes the city’s democratic pursuits. 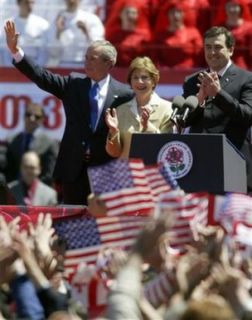 George and Laura in Georgia

“You gathered here armed with nothing but roses and the power of your convictions and you claimed your liberty. And because you acted, Georgia is today both sovereign and free and a beacon of liberty for this region and the world.” 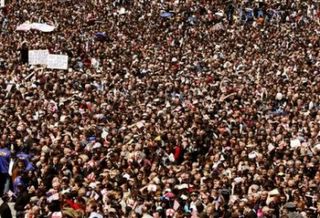 Thousands show up to see Bush

“When Georgians gathered here 16 years ago, this square had a different name,” Bush said. “Under Lenin’s steely gaze, thousands of Georgians prayed and sang and demanded their independence. The Soviet army crushed that day of protest, but they could not crush the spirit of the Georgian people.”

Bush is the first sitting U.S. president to visit the ex-Soviet Republic. He spoke in the capital’s Freedom Square, the rallying point for a 2003 ‘Rose Revolution’ that installed a reforming, Western-looking government. Estimates of the crowd size in Georgia varied wildly, from less than 100,000 to more than 300,000. Georgian President Mikhail Saakashvili said it was by far the largest gathering in the country since its independence, and it was certainly one of the largest Bush has ever addressed. 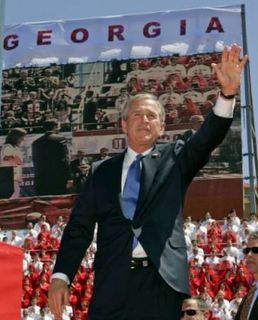 “Now across the Caucasus, in central Asia and the broader Middle East we see the same desire of liberty burning in the hearts of young people,” Bush said. “They are demanding their freedom, and they will have it.”

I’m booking a trip to Georgia! They rock!

The tireless Robert Mayer at Publius Pundit was up watching the event and has more. Robert’s analysis is brilliant and he has posted the text to the speech here.
Instapundit has a nice article about GW’s night up late. The “Great One” has linked to this post since then.
Lorie at Polipundit is talking about his Georgia dance steps. Welcome to those patriots she has sent on over!
Scared Monkeys are linking to the fun!
Welcome INDC, Town Hall, Free Republic , and IlliniPundit readers!

Another Update; The Anchoress has a truly brilliant post on today’s events. Here is a piece of it:

…But the people who have lived under a jackboot of totalitarianism and tyranny see someone very different, when they see George Bush. And they DANCE. And he dances with them…

More at her site under “Bush dances with free people; Albright Danced with Kim Jong Il”

Update 2: I found a bit on the grenade attack and Georgia’s “explosive history”… here.