Better than the gifts they’ve been tossing the Israelis… 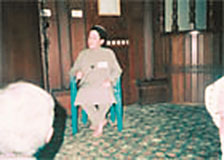 A 13-year-old Palestinian boy has become one of the most popular preachers in Hamas-controlled mosques throughout the Gaza Strip.

Amjad Abu Seedo, an eighth-grader at the Wakf (Islamic trust) School in Gaza City, has won the admiration of thousands of worshipers who arrive to listen to his sermons during Friday prayers. Among his followers he is known as the “young sheikh” and the “wonder boy” of Hamas.

Seedo said most of his lectures focus on the issue of death, particularly the death of the prophet Muhammad, as well as several topics related to the lifetime of the prophet. “I often talk about loving the prophet Muhammad and the way a good Muslim woman should behave,” he explained. “I also mention anecdotes that have a didactic message.”

“This boy is a miracle,” said Ahmed Khalil, a schoolteacher who has attended some of Seedo’s sermons. “This small sheikh is God’s gift to Hamas and all Muslims.”