**Streets turned purple with blood, the world has not witnessed a similar scene of this magnitude since Tiananmen Square in 1989** 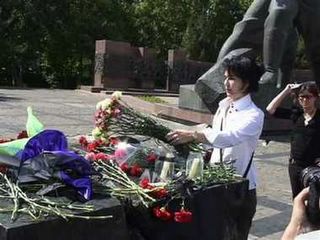 The head of the Committee for Fredom of Speech and Expression, Inera Safargaliyeva, lays flowers at the Courage Monument in the Uzbek capital Tashkent on Monday in a rare Uzbek Oppposition protest.

As authorities work to deny and erase the murders on Friday of hundreds of innocent men, women and children…the BBC reported that on Tuesday a group of some 30 protesters gathered outside the US embassy to publicise what they believe really happened.

They stood quietly holding banners, one of which read: “Get out, killer of the people – Andijan we are with you.”

To understand the political situation in Uzbekistan here are some comments from the people as reported today at the BBC.

The first reports are coming out of Andijan where government forces massacred hundreds of peaceful protesters on Friday. Since then it has been difficult to get news in and out of the area…

As news emerged early on 13 May of killings in Andijan, sources in Uzbekistan reported that Internet connections throughout the capital had immediately slowed down to almost unworkable speed. Access to independent online media, always complicated by the authorities’ efforts to block sites and its use of dummy “mirror” sites, became almost impossible from within Uzbekistan. Russian television was shut down, to be replaced by music. The BBC and other international cable television services, normally available to a small proportion of the population, were replaced by Uzbek and foreign entertainment channels. Many roads in Tashkent were immediately closed off, with particularly tight security around the Israeli embassy, where a suicide bomber was recently shot before he could blow himself up.

But, the government cannot silence the story of those slaughtered in Andijan…

It was extremely difficult for them to speak about their terrifying experiences. They said that at night they have nightmares of dead children and of streets turned purple by blood.

The survivors of the Andijan tragedy are struggling to come to terms with the carnage that unfolded in the Uzbek town on May 13.

Nabidjan Yunusov, a Tashkent resident, who had been hit in the hip by a bullet when the Uzbek forces crushed the protests, described the build up to the crackdown.

“I am myself a businessman, trading between Tashkent and Andijan. [On May 13] I went to Andijan, and saw a lot of people gathering near the local administration building, almost all the inhabitants were there. There were a lot of women, old people and children. Some of the women were carrying babies in their arms. I asked what was going on and what were people talking about. The demonstrators were protesting about a ruling of the local court in a case against a number of businessmen. They said the judgement was unfair. They wanted the defendants released, and end to state-sponsored violence and, above all, demanded democracy and freedom.

“We listened to the statements for a long time. No one wanted to leave the demonstration. There were no police forces to be seen. But at around 4 pm everything changed. Suddenly armoured troop carriers appeared in the central square and started shooting randomly at people.

“There were a lot of children and youngsters near the demonstrators, and many of them were the first to be hit. Panic broke out, people started running in different directions to escape the bullets.

“I ran as well and the security forces started opening fire on us. The bullets struck and we tried to carry some of the wounded in our arms. Then a bullet flashed past my head. I turned round and saw a middle-aged man fall to the ground – his face covered in blood. As long as I live, I will never forget this scene. I dream about it over and over again.

“We managed to stay alive by sheltering in doorways. Later in the evening, we were able to leave the city and headed towards the Kyrgyz border. We walked the whole night through heavy rain. There were many women and children among us. We were hungry and exhausted. And when we got to the village of Teshiktash, we were ambushed by Uzbek forces.

“Two women and three men fell to the ground. We could do nothing for them. Some people were wounded. It was when I was trying to protect the women and children that I was wounded in the hip. The pain and the shock made me fall the to the ground. The others grabbed me and we headed for the border. Only once we came across the Kyrgyz guards did we believe that we’d survived.

**“I want to stress that I did not see a single armed demonstrator. People like me turned up at the rally with no evil intent.** I want to thank our Kyrgyz brothers, they greeted us so warmly and helped to take care of us.” 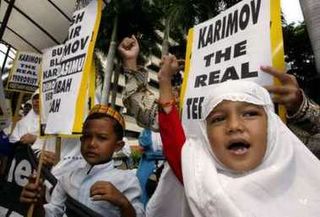 A protest in Indonesia against the Uzbekistan authorities.

“On [the day of the protests] I was in Andijan by chance, I was there because of some business matter. I saw a large crowd, and wanted to know what was going on. As you know we had similar events in Kyrgyzstan recently. I listened for a long time to people making speeches. They were saying that the authorities were persecuting business people and prevented them from leading a normal life.

“There were a lot of women and children. At around 4 pm shooting started from all sides. We were completely unaware that this might happen. The first ones to die were children standing next to the demonstrators. Then women were killed. I along with a crowd of people ran to a [neighbouring] street.

“Four men were hit at the same time and fell to the ground. I was shot in the arm and fell. But people grabbed me and took me to a safe place, where I was given first aid. I saw with my own eyes how children died from gunshots to the head. I saw how women fell, how wounded men screamed. I will never be able to forget this bloodshed. We walked the whole night to Teshiktash, and the famous ‘brilliant Uzbek soldiers’ were waiting for us. They killed several of us.

“[People]were waving white flags and screaming that they had no weapons, women and children amongst them, but they continued to shoot. One woman, who was wounded, fell on top of me. Her scream
s pierced my heart. I have no idea whether she is now alive or not, but her blood is still on my clothes. We managed to cross the border and save our lives. Now I am at home, and have never been so happy to have been born in Kyrgyzstan.”

Survivors are describing the executions of wounded men, women and children in the blood soaked streets…

In the aftermath of the mass shootings in Andijan, reports have emerged that injured people were summarily executed, and that many bodies, especially of women and children, were taken away and concealed by the authorities.

Uzbek president Islam Karimov, meanwhile, says that only nine people were killed in an operation to root out a dangerous group of Islamic radicals.

Andijan city centre and especially Babur Square were awash with the blood of men and women, young and old, who had come out, for the first time in many long years of oppression, to express their discontent with the regime’s policies. The blood of children was spilled there, too.

Body parts, brains and other internal organs along with personal items and children’s shoes were scattered within a radius of two to three kilometres of the square where the shooting began.

There were still 30 dead bodies on the square itself, and near the monument to Babur – the local boy who invaded India and founded the Moghul dynasty – lay ten more which people had collected together.

Eyewitnesses claimed that more than 1,500 people were killed by government bullets, although the nearest thing to an accurate estimate came from a local doctor who saw 500 bodies.

There is evidence to suggest that government security forces carried out deliberate extrajudicial killings once the mass shooting was over. The initial assault by security forces began when a convoy of armoured vehicles raked the crowd, estimated at 10,000-15,000, with gunfire without even stopping to take aim.

People scattered in all directions but continued to fall to the ground as high-velocity rounds reached them however far they ran.

Once the crowd had dispersed, eyewitnesses say the security forces went around finishing off the injured as they lay.

A middle-aged woman who gave her first name as Muqaddas told IWPR that at nine in the evening – three and half hours after the gunfire began – uniformed men were still shooting anyone who was moving.

A city pathologist said that on the night of May 15, she personally saw more than 500 bodies at School Number 15 in the old town district. Armed soldiers stood guard, but people were being allowed in to identify relatives.

However, this school housed the bodies of men only. The remains of women and children were out of sight – somewhere near the construction-industry college, local people said – and, unlike those of the men, were not being released to relatives.

For more on Uzbekistan, see:

Update: Glenn Reynolds of Instapundit continues today to give voice to those suffering in Uzbekistan.