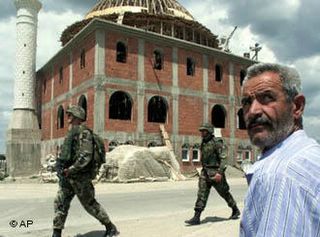 Kosovo is still considered unsafe for minorities such as the Roma.

Since the German economy has been a bit down lately ( highest unemployment since Hitler came to power) the government has been pushing a new export,… Roma refugees. By dumping the refugees back on their dangerous war-ravaged homeland, the Germans alleviate the financial drain the refugees create on the socialist state:

Germany is deporting tens of thousands of Roma refugees to Kosovo despite clear threats to their safety in the war-ravaged province and dire warnings from human rights groups that they will face “massive discrimination” on arrival.

The first of hundreds of planeloads of deportees will arrive at the Slatina airport in the Kosovo today (5-19), blazing a trail for up to 50,000 people who are to be sent back to the explosively unstable province.

Leaked documents obtained by The Independent reveal that the German government took the controversial decision to eject thousands of Roma refugees and other minorities in November of last year, regardless of the risks they may face on returning home.

At a meeting of German state legislators, officials made it clear to central government that the Roma were unwanted and should be deported as soon as possible, starting with those costing the state money in social welfare payments.

The confidential paper shows that a majority of state leaders “call on the interior ministry to enforce the quickest possible return of the refugees [to Kosovo]… It would therefore be in the interest of the public authorities, which are in a tense situation – to prioritize the return of those, who receive social welfare.”

Once back in Kosovo the refugees can expect no aid either from Germany or the United Nations which administers the province.

The German policy of deportation has been discussed for some time, at least since 2002.

Some Germans are protesting the deportation of the Roma refugees.