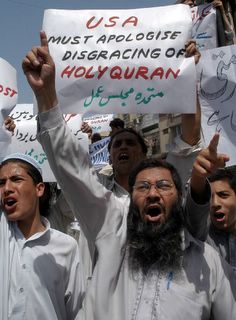 A bit miffed… in Karachi, Pakistan

Muslims in Afghanistan and Pakistan were skeptical Monday about an apparent retraction by Newsweek magazine of a report that U.S. interrogators desecrated the Koran and said U.S. pressure was behind the climb-down.

So, that’s my advice to Newsweek. They need only present their track record. After that, everyone will know what side Newsweek’s on and the doubters will see they have no reason to.

I’d throw in a few copies of The New York Times as well.