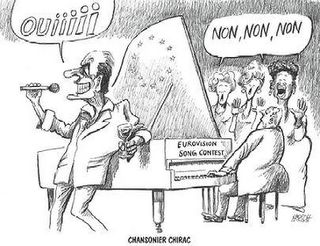 French voters rejected the European Union’s first constitution Sunday, President Jacques Chirac said — a stinging repudiation of his leadership and the ambitious, decades-long effort to further unite the continent. Chirac, who urged voters to approve the charter, announced the result in a short televised address. He said the process of ratifying the treaty would continue in other EU countries.